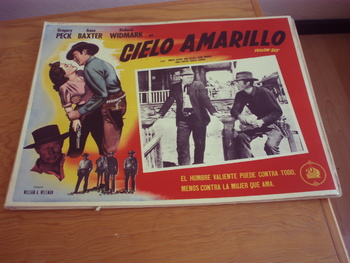 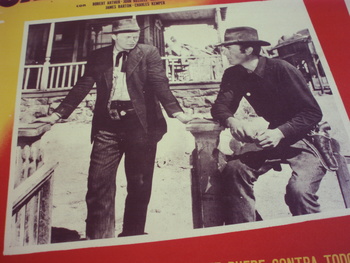 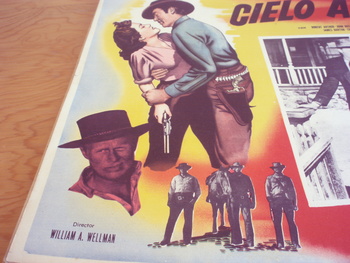 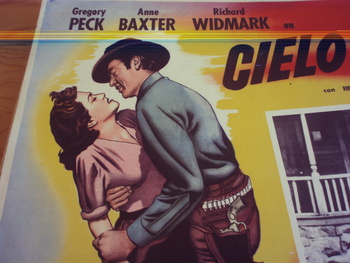 Good afternoon everyone,
There's nothing quite like sitting down and watching an old western. The above photos are of a Mexican Lobby Card from the 1948 movie Yellow Sky or in Spanish Cielo Amarillo staring GREGORY PECK, ANNE BAXTER and RICHARD WIDMARK. The art work is quite appealing to the eye. I have seen this original movie and was happy when I came across this 12 1/2" high by 16 1/2" wide 1948 lobby card. All 3 lead actors put on a fine performance under the watchful eye of director WILLIAM A. WELLMAN who directed many movies during the 1920's, 30's, 40's and 50's

In 1867, a gang led by James "Stretch" Dawson (Gregory Peck) robs a bank and flees into the desert. Out of water, the outlaws come upon a ghost town called Yellow Sky and its only residents, a hostile young woman called "Mike" (Anne Baxter) by her prospector grandfather (played by James Barton). Stretch is attracted to Mike. While the men recover from their ordeal, Dude (Richard Widmark) snoops around. Dude tells the others that the old man is mining gold, but Stretch is unimpressed. The next day, Mike and Grandpa take to the hills. A confrontation between Stretch and Dude over the leadership of the gang is interrupted by Mike shooting at them. However, when Grandpa is hit in the leg by a ricochet, Mike surrenders..

REMAKE: WIKI
The success of the film spawned a radio adaptation starring Peck and hosted by director William A. Wellman, which was broadcast on Screen Directors Playhouse on NBC Radio on July 15, 1949. The film was remade in 1967 as The Jackals. Filmed in South Africa at Killarney Film Studios by producer-director Robert D. Webb, The Jackals starred Robert Gunner, Diana Iverson and, as the old man, Vincent Price.