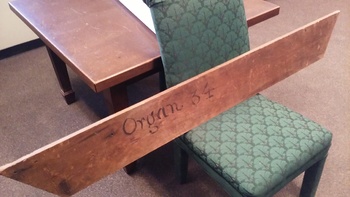 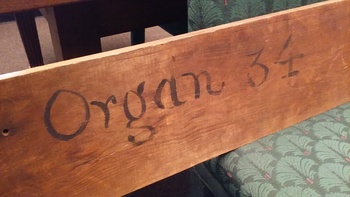 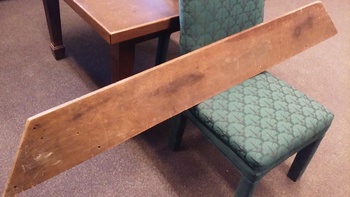 Here's an item with more questions behind it than anyone could ever possibly hope to answer. Still fascinating to ponder, anyway...? :-)

This is basically a clear wooden (pine) plank (8-3/4" wide, 7/8" thick, and 6' total length) bearing the words "Organ 34" inked (probably, not paint anyways) in elegant script lettering. It is highly likely to have once been part of the inner 'support structure' of a church pipe organ, also very likely to date from anytime in the mid to late 1800's if not even earlier.

I got it a few years ago (along with several trucksful of other much more contemporary miscellaneous pipe organ parts) from a storage locker, reportedly previously belonging to a deceased gentleman from the Milwaukee, WI area (I think?) who had spent his life working on pipe organs.

It is typical for pipe organ builders (especially in the 1800's, but still to this day) to sequentially 'number' their instruments during construction -- also not unusual for any random pieces which might bear any 'interesting' markings/etc to be retained (souvenirs, kinda) when an older instrument is being replaced by a newer one. (and pipe organs tend to have a 50-100yr 'life cycle' at least, if left to their own)

Thus, my conjecture that this was one such part (a diagonal brace on a frame holding something heavy up in the air?) which could very well be the last surviving bit of "somebody's company's 34th job", back in 18-hundred-something. Who wrote it, who built it, what it was, and where, will likely never be known again -- there were actually numerous pipe organ building firms active in the northeast USA during the 1800's, but without any further evidence which would definitively link this part to any one of them, it will probably remain impossible to ever know.