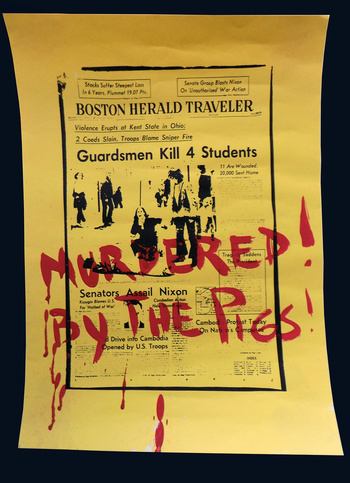 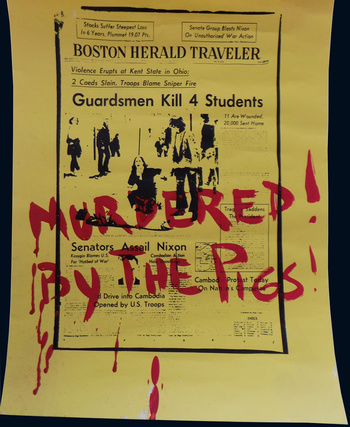 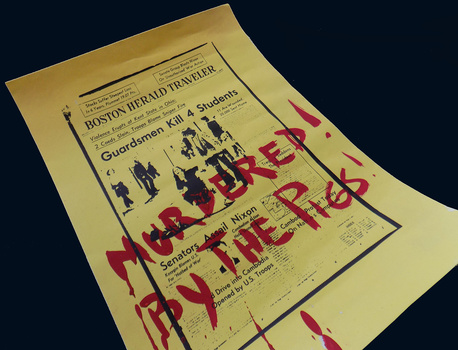 Being the 47th anniversary of the 1970 Kent State Massacre I want to show a recent acquisition. Instead of explaining it myself - this from the man, Sumner Stone who was there in Boston when this created:

EXTREMELY RARE, perhaps UNIQUE MAY 5th 1970 HAND-SERIGRAPHED POSTER (18.75" x 13.5") Replicating the FRONT PAGE of "THE BOSTON TRAVELER" that DATE. Depicting The now iconic photo of the YOUNG WOMAN KNEELING OVER THE BODY of ONE of the STUDENTS SLAIN at KENT STATE by the OHIO NATIONAL GUARD. The KILLINGS PRECIPITATED a NATION-WIDE STRIKE OF STUDENTS, FACULTY and other ANTI-WAR PROTESTERS. Among the STRIKERS were STUDENTS & FACULTY of the BOSTON MUSEUM of FINE ARTS SCHOOL Who established a PRINT MAKING and INFORMATIONAL STRIKE CENTER in the SCHOOL THE EVENING of the SHOOTINGS. This continued to operate for TWO to THREE MONTHS, producing approximately 70-75 SILK-SCREEN (Serigraphed) PROTEST and INFORMATIONAL POSTERS for the GREATER BOSTON area.

This was the SECOND or THIRD POSTER produced the MORNING AFTER THE SHOOTING. A SMALL NUMBER were PRINTED WITHOUT the CAPTION (just REPRODUCING the FRONT PAGE of the now defunct "BOSTON TRAVELER") and distributed to convenient walls, etc. To my knowledge, NONE OF THESE WERE SAVED. I WAS SO INCENSED BY THE KILLINGS THAT I got the idea to HAND PAINT the words "MURDERED BY THE PIGS" in DRIPPING RED PAINT SUPER-IMPOSED over the POSTER. As I recollect, about 4 or 5 POSTERS were so prepared before someone from the FACULTY who had MORE AUTHORITY THAN US LOWLY STUDENTS (I was a Law Student at nearby NU <Northeastern>) PROTESTED that the ALTERED POSTER WAS, IN HIS OPINION, RATHER INCENDIARY AND IN QUESTIONABLE TASTE AND SHOULD NO LONGER BE PRODUCED ON THE PREMISES.

Of the 4 OR 5 Copies, I keptT 2 and the other 2 OR 3 were put up on walls. MY OTHER COPY WAS GIVEN AWAY BY ME AT LEAST 25 YEARS AGO- I don't recollect to whom - and has been lost in the shuffle. I have no idea if it still exists today

Declaration of independence/ Americ...
$11
See all