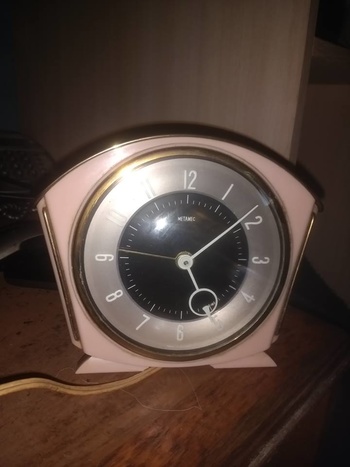 Metamec made in England, pink alarm and clock electric power, art deco possible made in the 1950s.

Metamec was a manufacturer of domestic clocks in the second half of the 20th century, and was based in Dereham, Norfolk, England. The name "Metamec" is derived from "metal-work and mechanics". The company started as an offshoot of the furniture manufacturers Jentique in about 1941,[1] which made boxes for instruments and bombs during World War II.

I have sold many of the vintage sunburst or Starburst clocks which were nasty cheap and the rays of the clock turn up their points if sneezed upon. Some of the Danish or German clocks of the period and style were better made.