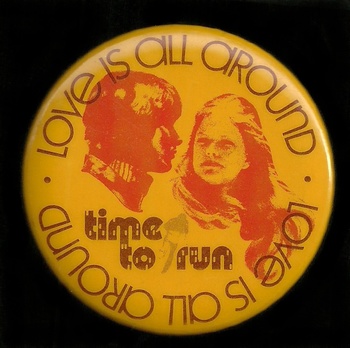 This button was based on a Billy Graham movie from 1973 "Time to run" Love is all around, A drama that looks at the “generation gap” and conflicts from it in many homes, and shows how one family faced and overcame these conflicts. Starring Ed Nelson, Randall Carver, and Barbara Sigel
The Soundtrack was put out on a LP but never really crossed over to popular music.
Often listed as a Vietnam era or a 1970s 2 1/4" button the back story is rarely posted, I've seen it sell from $1.00 to $40.00 (40 for those with more dollars then cent's)

The roughly 1/2 hour movie below:
https://billygraham.org/video/time-to-run/