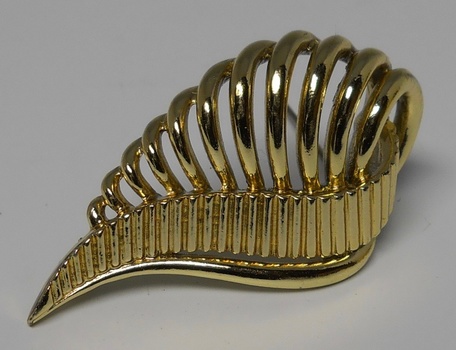 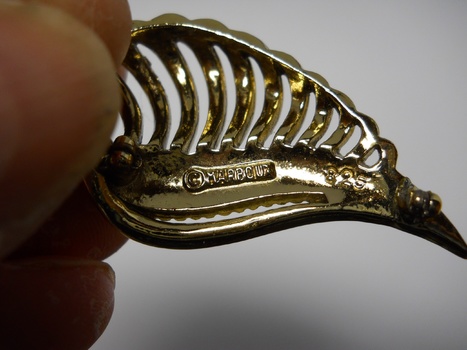 I am thrill to share with you my new brooch design by "boucher" mark on the back "Marboux" and stamp with the number 825 witch mean style, well i will never expect to find this brooch on the pegboard and price at $3.99, just for the gold weight at 15 gram, this little treasure retail what i pay, humm to bad.
As per Today 07-5 , gold plated, no gold value, humm ;-(

This little brooch is 2 inch long by 1.25 high, weight 15g
Thank you to Bonnie to provide me the right isight, no big value

Marcel started his Marboux line to provide lower cost jewelry and fill the gap left by his premium line, but it no longer was produced when Sandra joined. He sold jewelry to Ciro, which had stores in New York, London and Germany, and they bought in such quantity that he agreed to add their name on the back of the designs produced for them.

He expanded abroad and was paid a royalty from his sales arrangement in Belleville, Canada, and started a similar arrangement in 1953-54 in Paris. France was a difficult market and the effort petered out, but Sandra remembers the stylish presentation at the sumptuous Hotel Le Crillion with models wearing the Boucher jewelry. The Canadian market was more receptive, although it was more conservative than America. The Canadians would come to New York to choose the designs they wanted for their market, and the molds were made in New York and then sent to Canada for production. Marcel would go to Canada and take the opportunity to visit his mother who had emigrated to Montreal.

Marcel wanted to keep his business small, and it reached a peak of 60-80 employees in the 1950s. They only made to order after producing the first models, and as few as 50 pieces might be manufactured if a design proved unpopular. He never had ambitions to be big, like Trifari: "One bad year and you are in trouble," he confided to Sandra. He knew Alfred Philippe of Trifari personally and admired him as a fine designer-a real artist.

By the mid-1950s, Marcel was becoming increasingly dissatisfied with the lowering of standards in the costume jewelry industry. In 1955-56 they had to send some Boucher designs to Providence to have them made cheaply enough to fill the low end of the line. To save costs they stopped polishing the back of the jewelry around the catalog number, and Sandra points out that this is one way to date the later pieces.

They believed the standards began to decline when a number of new firms entered the market in the late 1950s, including some which specialized in high volume/low quality production. Price competition forced a reduction in quality to whatever the market would bear. The buyers were a large part of the problem-previously the better stores employed their own buyers who had been with them for many years and knew the "look" each store wanted to project. Later, younger buyers simply ordered what the figures said they sold most of, which may have been good for their short term profit, but did not encourage innovation and quality. The "look" became more simple, too, and it just was not possible to sell the large pavé rhinestone pieces.

Marcel and Sandra continued to innovate, both with designs and with materials, but in 1958 they both agreed she needed a new challenge, and he helped her get the job of Chief Designer at Tiffany & Co. She headed a department of three to four designers and reported directly to Mr. Lusk, the President. Her department was responsible for special orders and stock designs and she worked on the same floor as Tiffany’s most famous designer, Jean Schlumberger. She only met him once since he was involved with his own designs in a unique style which she greatly admires.

By 1961, Sandra again found fine jewelry too conservative-more a manipulation of gemstones than the kind of design she enjoyed, and she returned to Boucher. It was in this period that she designed the enameled Boucher peacock with Marcel. The model makers did a fine job with the modulation and it was one of his favorite pieces, because it was such a good seller. They experimented with leather and ostrich and mother-of-pearl jewelry. Marcel also designed a series of dogs with his habitual attention to detail. The only freelance design Sandra remembers them producing was the skunk, which Marcel and the Nieman Marcus buyer both loved.

In October 1964, Sandra and Marcel were married. But on returning from their honeymoon, he was told during a routine medical checkup just before Christmas that he had 6 months to live. He died only six weeks later.

Marcel left the business to Sandra, because he knew she would try to keep it going and same the employees’ jobs. It was a very difficult time, with Sandra taking care of work by day and designing by night. She is an accomplished designer and not a business woman and she had no experience of things like negotiating loans with bankers. Some in the industry said she would not last six months in this competitive business, but she kept it going until 1970. She found her peace in these difficult times by taking vacations in faraway places without telephones like Nepal, the Amazon and Antarctica. One of her many designs was her "Bees on Honeycomb" which was a great success although Marcel had rejected it when he was alive.

Finally, it was enough. Meeting payroll each week was a strain and she could make more money as a freelance designer, so she sold the business to Irving Ornstein, the co-owner of Davorn Industries10. Part of the agreement was that Sandra would design watches and some costume jewelry for Davorn for five years, and it is during this time that watches marked "Marcel Boucher" were made to her designs.

Sandra had many opportunities when she left Davorn. One of the stone dealers suggested Ciner might need her, and today she still works about one day each week freelancing on Ciner’s design projects. She also took on other non-competing freelance design work-one fine jewelry, one premium and one low-end costume jewelry. This time she enjoyed returning to fine jewelry, since mass production had brought about a deterioration in much of the costume jewelry.

She also started teaching "Creation and Rendering" at the Fashion Institute of Technology in New York, although this started purely by chance. She was there at a cocktail party given in memory of Marcel and, without thinking, mentioned that she would like to teach. A few weeks later she received a phone call saying "tomorrow you have a class"! She was totally unprepared but 25 years later she is still teaching 1-2 days each week, not just jewelry design, but shoes and frames and other items. With 20 young students in each class she has plenty to keep her challenged.

Sandra still lives in the apartment which she and Marcel shared, and which he decorated carefully with his usual eye for detail. He loved the oriental style and even had the door bell cast in oriental motif at the factory. He made the handles on a chest of drawers by cutting in half some Boucher bangles in bamboo pattern. She still entertains on the oriental style table Marcel himself designed. The kitchen is where he practiced his skills as a chef. The shelves are full of mementos from their travels. "I still miss him very much", she says, and everywhere you look, Sandra has kept her husband’s memory alive.

As a professional designer and his wife, Sandra is in a position to share some unique insights into why so many people continue to admire the work of Marcel Boucher. "His jewelry is different", says Sandra, "He was always innovating and ahead of his time. When he launched his first jewelry, nobody had ever seen anything like his three-dimensional designs and colorful enamels. He continued to be an innovator until the end. He was a good businessman, although he was too honest and not shrewd enough! He ran a very efficient production operation and was a good person to work for."

"Not only was he a very good designer, but he was a jeweler and mechanic too, who knew model making and tooling. He took pride in his work and was always very demanding and a perfectionist with an eye for detail. He studied his subjects intimately. But above all, he had impeccable taste and knew what was chic," she says.

About her own talents Sandra says modestly: "I love what I do, and this shows in my designs, which are very fluid. Although I can design in any style, my personal style is very recognizable." Her accomplishments speak for themselves. Rising from fine jewelry designer for Harry Winston to Chief Designer at Tiffany would be challenge enough for most, but Sandra also reached the pinnacle in costume jewelry during her long collaboration with Marcel Boucher. She achieved the difficult transition between precious and costume jewelry design not once but three times. Admirers of Boucher jewelry may consider themselves fortunate to have so many examples of the work of this exceptional designer.

"Marcel and I were always reaching forward and we were always ahead of our time," says Sandra. "We always looked for the next challenge, the next fashion. We never dwelled in the past or lived in our memories, and I’m sorry if this leaves some of your questions unanswered."

Sandra’s approach to life has not changed. She still enjoys the challenges of her work and her teaching. She is a skilled and experienced designer, who still gets excited by new fashions. She is a dynamic and charming lady, whose enthusiasm and "joie de vivre" are contagious. It is not hard to understand why Marcel Boucher and his collaboration with Sandra created some of the most admired American costume jewelry of the 20th century.