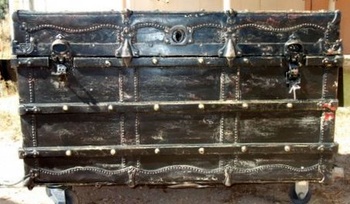 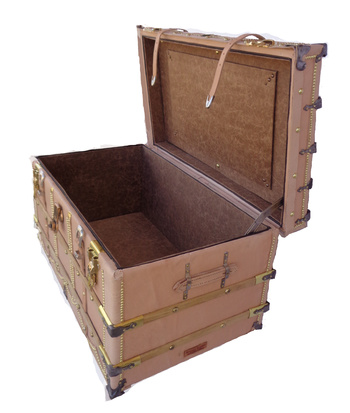 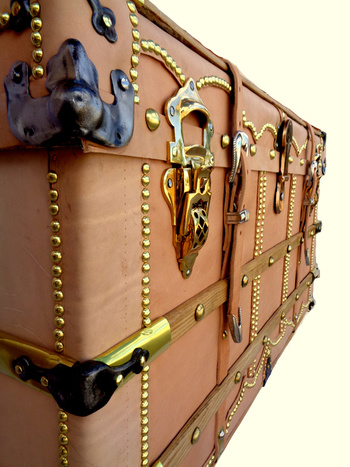 A few years back, I restored a trunk very similar to this one and when I found this one in its raw state, I had an idea to do it all again, but this time instead of black, I wanted a more 'natural' feel. Funny thing about this one was that somebody had cut it down in size. That's right, and if you look closely at the slat right under the dust band, you can see the 'customization' that had taken place. Sections of this slat were cut to allow for the draw bolts. Surely that wasn't how it was built! OK, not really a big deal after all. Just remove that slat and get on with your work Mr. "Historical Accuracy"!
I used a natural veg tanned leather and then decided to augment the piece with large brass draw bolts. And a copper-alloy lock. And how about some fancy belt hardware to boot! And don't forget to tip the slats with brass sheet! I'll also bet that the trunk was not originally lined with that synthetic blend fabric either! Historical accuracy? I think not! A friend of mine stopped by the other day and told me that he thought the trunk looks better now than it did when I found it, so I guess my madness does have some method. I do wish I knew what company made these though. They were some really great builders, those guys.