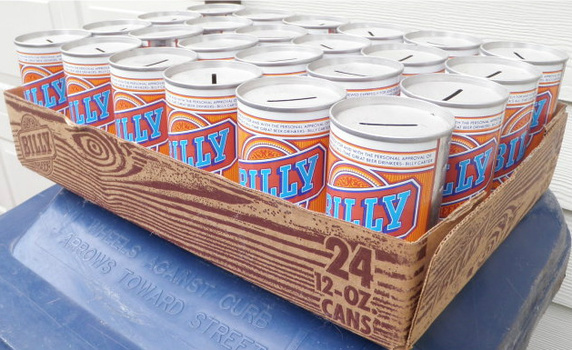 “It’s the best beer I’ve ever tasted, and I’ve tasted a lot,” says Billy Carter on the box. One could say it was hyperbole but those who tasted Billy Beer, others might say it was dementia. This stuff was AWFUL. But can collectors snapped them up,Grandma's who didn't drink saved six packs, and despite millions of cans being made (and saved) people think they are worth something.They are..as scrap metal.

In 1977, the Falls City Brewing Company launched production of Billy Beer, named after President Jimmy Carter’s younger brother. What can you say about Billy Carter? Well, what can’t you say?

Where Jimmy Carter was known as a straight-laced politician, Billy Carter perfected the image of a good ol’ boy. During President Carter’s campaign in 1976, brother Billy admitted to a contingent of the press: “Yes, I’m a real southern boy. I got a red neck, white socks, and Blue Ribbon beer.”

Others described Billy Beer as being weaker swill than the usual light-bodied American swill being brewed at the time. Billy Carter’s favorite beer was Pabst Blue Ribbon, if that gives you any indication of what Billy Beer might have been aiming at.

Billy Beer was produced in the millions but saw dismal sales figures. After production stopped, the beer became something of a collectible. In the late ’70s, someone took out an ads in a Chicago paper offering to sell unopened cans of Billy for $1,000 a sixer. Shortly thereafter, the same seller began to offer the cans at the bargain-basement price of $200 per six pack. Brilliant marketing,eh? I wonder of he ever SOLD any?

No, this can is not rare. There were MILLIONS of cases sold by 4 different breweries in the late 1970s. One estimate of the number of Billy Beer cans made is 2 BILLION. As a result, it is worth about 25 cents at most and then only if it is in very good shape, and if you can find a collector who actually needs one. It is not worth more if it is still full or if it is "air filled." The same lack of any value is true of World's Fair Beer, JR. Beer, MASH Beer, Bicentennial cans, Hudepohl Bengals/Reds cans, Schells commemoratives etc.

Our collecting chapter has a "Billy beer can shoot" every fall. My beer breatheren bring their Billy's (and high powered weaponry) to meet a quick death to a few cases of these cans. I'll probably bring these cans to our next shoot.In fact, you can bank on that!