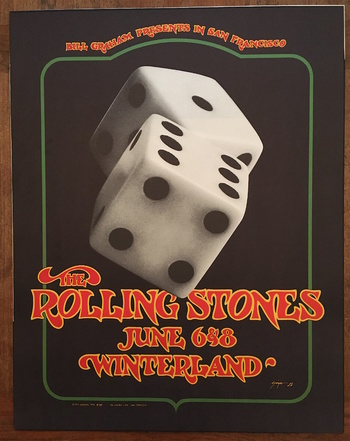 Known among collectors as BG-289, this is the second printing of David Singer's poster for several shows by the Rolling Stones at Winterland in San Francisco, on June 6 and 8, 1972. Stevie Wonder opened the shows, and there were two shows on each date, one at around 4pm in the afternoon and one at around 9pm. Tea Lautrec Litho was the printer. Dimensions are just under 22x28 inches.

I've spoken with David Singer extensively about this poster, and here are a few anecdotes you may find interesting.

* Although this is the second printing, it is closer to the artist's original design than the first, which has a white line along the bottom-left edge of the upper die. The printer added that line to differentiate the die from the black background, but it was not in Singer's original design. In fact, on the day that Tea Lautrec was doing the second printing of this poster shortly after the concerts, Singer happened to be visiting Tea Lautrec. When he saw that his poster was being readied for printing, at the same size and on the same stock as the first edition, he walked over to the make-ready table and took a black Sharpie to the white line, thus restoring the poster to its original design, and giving collectors a way to tell the difference between the first and second editions.

* Although many people assume that the inspiration for this poster was the song "Tumbling Dice" off of "Exile on Main Street," which had just come out a few weeks before these shows, Singer's dice image had nothing to do with the song. In fact, it is taken from a slang phrase for "throwing dice," as in "rolling stones," so, for Singer, a poster for the Rolling Stones ought to have a couple of rolling stones on it. In fact, the idea for this poster actually dates to 1969, when Singer and another rock-poster artist named Randy Tuten were asked by Bill Graham to prepare poster designs for the band's upcoming shows at the Oakland Coliseum on November 9, 1969. Graham had asked the artists to stop by between 5 and 5:30 so he could choose the design he liked best. Tuten showed up first, Graham got impatient, and he gave the assignment to Tuten. When Singer arrived within the half-hour window, it was too late, but Graham liked Singer's image, so, in 1972, Graham called Singer and asked him to use the dice for the Winterland shows that year.