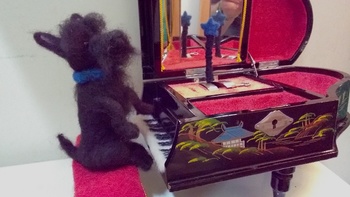 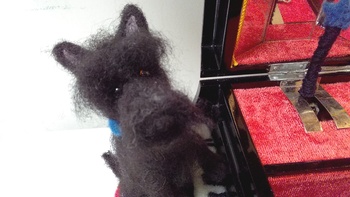 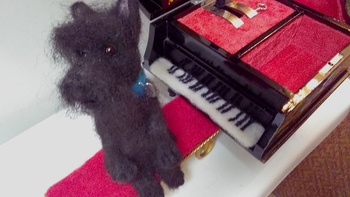 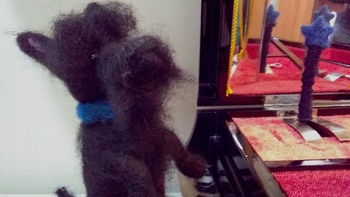 One of my fellow vendors has been creating these wonderful "needle felted" sculptures over the last few months. She's a very talented lady and can make just about anything totally freehand ! There were bunny rabbits, eggs, and chicks for Easter that where gone before they even hit the shelves. I really don't know the time needed to create these but I'm pretty sure she would be busy 24-7 if she took orders on a regular basis. So I mentioned that I'd love a Scottie dog when she had the time. We were working together that day and I found the Japanese grand piano jewelry box. It plays "I Could Have Danced All Night" but the ballerina was missing. I showed it to her and I said "How about a Scottie playing the piano"??. She laughed and said sure and took the box home to repair and clean up. A month later I get a call from the store saying that she had dropped off my request and here's the result. I was also told I better come pick it up before it gets sold (not really) because everyone wanted it ! She looks just like my little girl. She even felted a keyboard because it was just a blank space. I don't know how she does it but she really has a knack for capturing just the right expression in everything she makes. I smile every time I look at it. I have yet to thank her in person because she dropped it off just before they left town for the week. What a nice surprise ! -Mike-

Needle Felting - Courtesy of Wikipedia
Needle felting is a method of creating felted objects without using water. The special needles used to make 3D sculpture, jewelry, adornments and 2D art have notches along the shaft of the needle that catch fibers and tangle them with other fibers to produce felt. These notches are sometimes erroneously called "barbs", but barbs are protrusions (like barbed wire) and would be too difficult to thrust into the wool and nearly impossible to pull out. There are many sizes and types of notched needles for different uses while working. Needle felting is used in industrial processes as well as in individual crafting.
Needles used for crafting are often very thin needles, sometimes fitted in holders that allow the user to utilize 2 or more needles at one time to sculpt wool objects and shapes. The single thin needles are used for detail and the multiple needles that are paired together are used for larger areas or to form the base of the project. At any point in time a variety of fiber colors may be added for detail and individuality, using needles to incorporate them into the project.