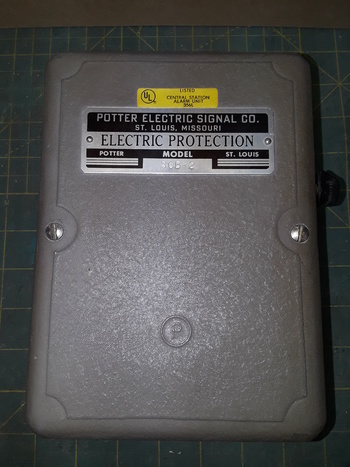 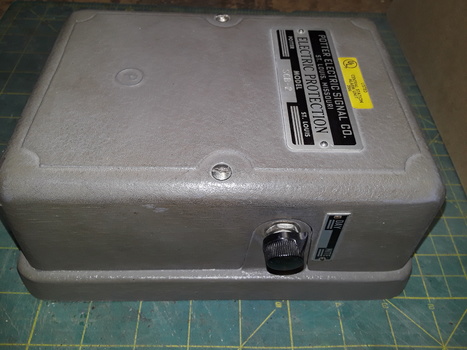 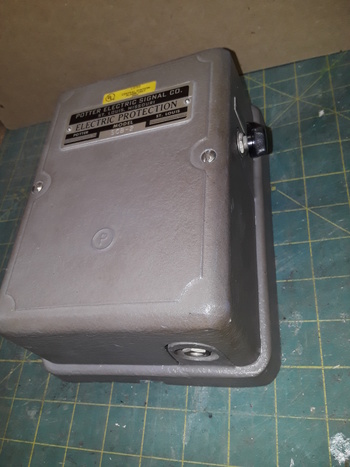 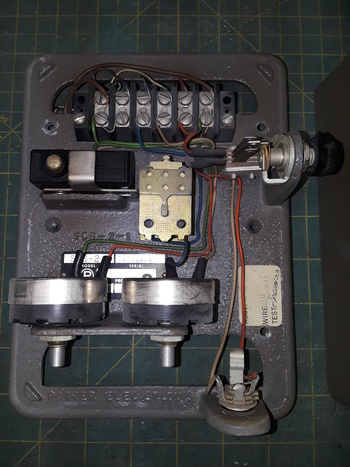 Here's another item from my "obscure electrissical things" collection. ;-) :-)

This device is (at least part of) a vintage type of intrusion alarm (as near as I know, anyway?) which would have been hard-wired up to a network of trip-switches mounted to doors/windows/etc. -- if any of those switches actually 'tripped' while this thing was turned on, it would apparently then send some kind of particular signal to a "central office" monitoring facility (via telephone landlines?) who would in turn notify police/etc of the alarm.

Manufactured by POTTER ELECTRIC SIGNAL CO. of St. Louis, MO, a company that appears to remain in business providing (much more hi-tech) alarm and security systems to this day. Its cast aluminum housing is about 8" x 6" x 3-1/2" with brown crinkle-finish paint, and features its aluminum nameplate (noting that this is a model# "SCB-2", which oddly enough no longer comes up when looking around the POTTER website?) and it has a "DAY - NITE" switch on one side and a 1/4" phone jack on its bottom. Its inner parts appear to be complete and I wouldn't be surprised if it is still functional, but how would one know??

I also don't know exactly how old it is, but I recovered it from a building first constructed in the late 1960's/early 70's, so I suppose it is a product of that time...?