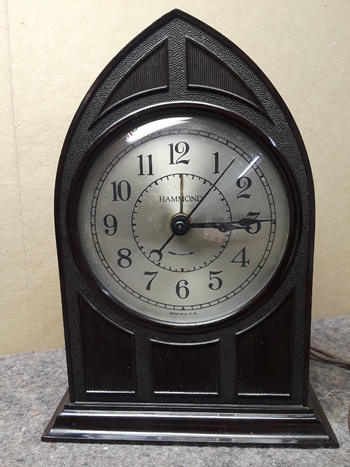 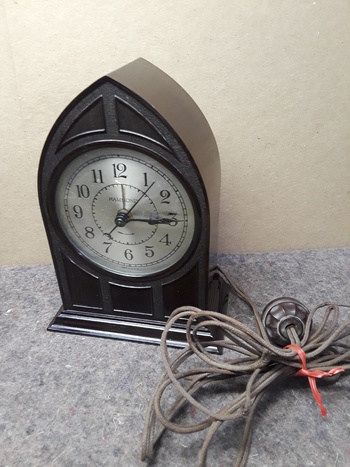 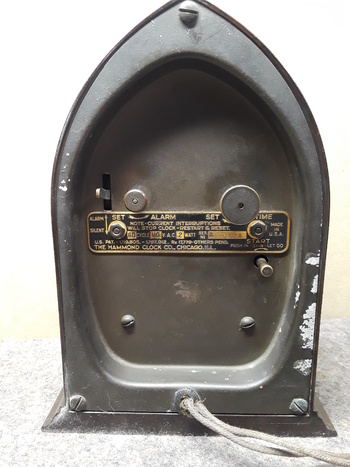 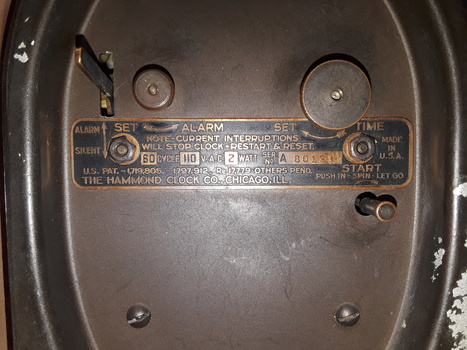 I showed my HAMMOND "HAMPTON" kitchen clock a couple yrs ago now, so's its high time I got some pics of a few more of my HAMMOND clocks isn't it...? <lol>

Measuring about 7" x 5" x 3", this is/was one of the most popular (thus now more commonly found, there are already a few more similar that have already been shown on CW) general styles, in a brown bakelite case with an 'art-deco gothic cathedral' inspired design to its shape. Over their relatively few years of production these clocks were available with slightly differing mechanisms, (though all with the same basic patented electric motor driving them) this one is a model that happens to have an alarm function/hand/knob.

Its original cloth covered two wire power cord has now lost nearly all of its outer layer of cloth, the plug might or might not be original but if a replacement is likely an 'early replacement'. Its brass nameplate on its rear shows it to be serial# A 80193. I'll guess (without knowing for sure) that it tends towards the earlier end of the production schedule.

This clock is not currently functional, though I have (oh, so carefully!) actually plugged it up to see if it would run, it didn't. It was purchased years ago in a 'box lot' of HAMMOND clocks sold "for parts" (including the HAMPTON) and beyond that initial test (it failed, one or two others still worked or were otherwise easily fixed) I've never even opened its back. I suppose I should do something about that situation...?? ;-) :-)