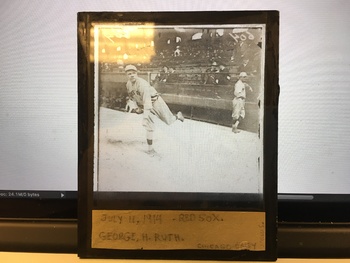 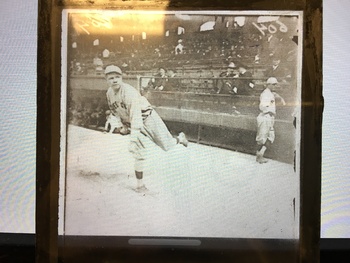 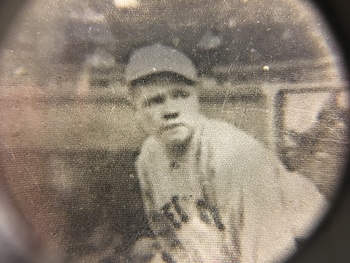 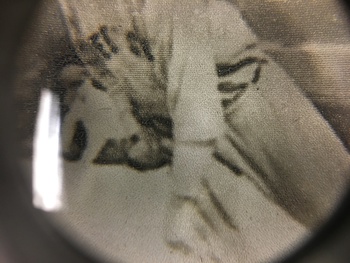 This is a magic lantern/glass lantern slide of Babe Ruth pitching for the Boston Red Sox. The size is 3.25" X 4" (standard lantern size). There is a caption that reads July 11, 1914 - Red Sox George H. Ruth, Chicago Daily News on the bottom of the slide. I know this isn't an accurate description because the original photo is known to have been taken in 1917. But this could simply be a stock slide from a presentation that mentioned his first game in the major leagues. I don't think it was meant to deceive anyone into thinking this is from 1914, but you never know.

Now, there are markings from the original photo on this slide as well, so I am thinking it was somehow transferred onto a transparent film, which shows very slightly around the edges of the picture. You can see it's a little raised on the edges, so it seems that the transparent film is locked between the two pieces of glass. I have read that this was a technique used for amateur magic lantern slides makers from special kits to make them.

I wanted to see if there were any half tone dots that would indicate that it was printed from a modern printer so I took a 40X magnifier and took a pic through the magnifier. You can see there's some texture, but I believe that's the texture of the transparency sandwiched between the pieces of glass. What I saw was something that looked more like film grain than half tone dots.

I just want to know if there are any magic lantern enthusiasts that can say whether or not this is a period piece (amateur as it might look due to the fuzziness of the image and less-than-stellar tape job) or if it is a modern reproduction meant to look like an old magic lantern slide.

Any info would be appreciated, on the good side or the bad side.