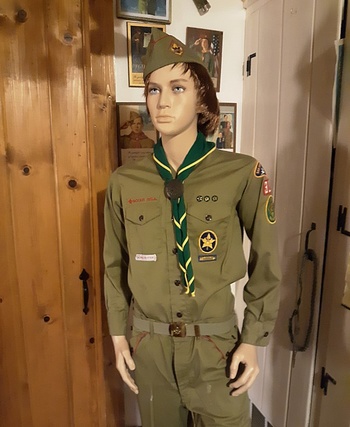 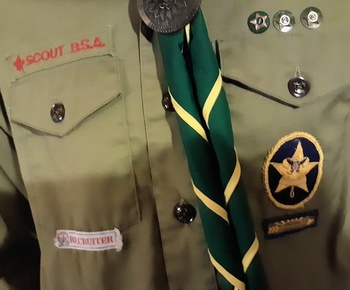 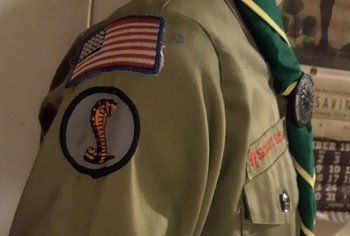 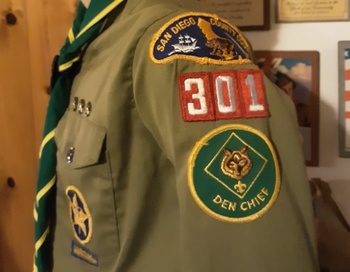 Picked these up at the last Rose Bowl. The shirt, pants, scarf and slider or all new (to me). The patches and pins all came with the shirt aside from the Den Chief patch I got off eBay. The position patch was the only one missing. Also exciting is that I took these with my new smart phone and I think the photos really pop. Note I uploaded them to my PC for editing and posting. On to the exciting features for the shirt.
Under the right pocket (left side of photo) is a recruiter patch. Bottom of left pocket is the Arrow of Light which is a cub scout patch that can be worn on the Boy Scout uniform. Above that is the Star Scout Rank patch which is one of the higher ranks. Above the left pocket are the star pins for every year in Boy Scouts. Looks like he opted out of wearing the Cub Scout pin.
Right shoulder has the flag patch which became standard in the 1970s. Also a very sharp looking Cobra Patrol patch.
Wrapping it up on the left shoulder is the Council Patch, troop number and position patch. This one is a Den Chief. That means working with a Cup Scout den. After one year of service one gets to wear the Den Chief cord. The Den Chief cord is quite showy and deserves a dedicated post. Also a post for the scarf and slider wil be coming up.