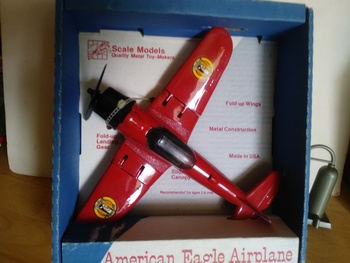 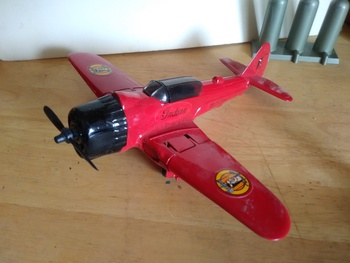 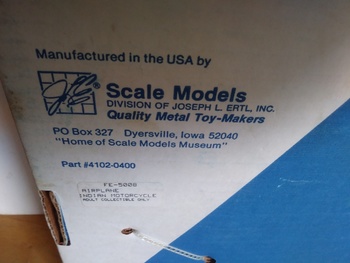 This is made from some altered Hubley #495 molds. Hubley made the #495 as a Navy Fighter/Bomber from '56 to '65. Gabriel bought Hubley in '66 and marketed the 495 with new numbers and color combos as the American Eagle, Flying Circus, etc. Then Gabriel sold out their toy division to CBS(?)(the history gets murky here) around 1980. Sometime in the 80's some of the original Hubley molds(the better detailed Ford Tractors, the #495, maybe some others) were sold to Ertl. And lo' thus it was that Ertl begat the molds to their Scale Models subsidiary. I know these were around into the early 90's during the diecast craze of vehicles/planes with manufacturers names in them.
I said I wouldn't buy one these unless I could get it for the maximum I thought they were worth. I got this for $20.00 less than my arbitrary price.
OMG what Ertl did to my precious childhood favorite plane, the venerable indestructible #495! It's made just for display, but geez! The wing and landing gear springs are anemic, plastic prop replaced the original metal one and it's pimped out with a tinted canopy. No machine guns or bombs. To sum it up, it sucks. I was hoping to use the cockpit and canopy(sources drying up), but they tinted it.