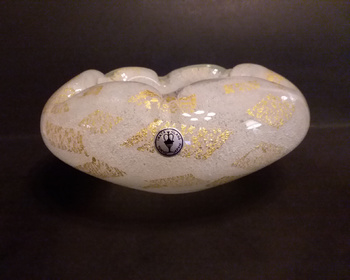 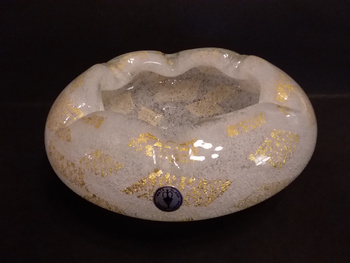 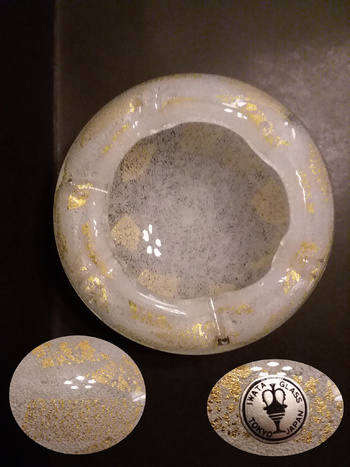 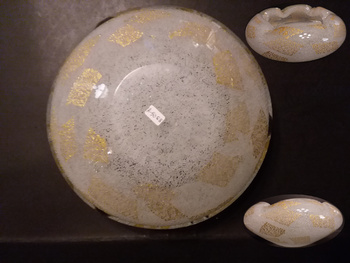 This ashtray is 9" in diameter and 4.5" high, weighs 8 lbs and has an Iwata foil label. The bottom is smooth and may have been ground and hot worked or this piece may have been made in a mold. This is Iwata production glass, but many sellers advertise these as being personally made by the hand of Iwata Toshichi. Being production glass, it was made by whichever artisan/employee was tasked with making these. It may have been a member of the Iwata family, or not. No way to tell. It seems likely it was designed by a member of the Iwata family, though. Guessing it dates to the 1970s or 1980s.

Despite the monstrous size of this ashtray, it really only accommodates three smokes. There appear to be six slots but three of those are crimped in such a way that I don't think a cigarette would be stable in them. They may be for symmetry or meant for something larger, perhaps a cigar. There is also an inventory tag on the bottom, but it is homemade, so probably a collection tag. This ashtray is like brand new. I could not find a single flaw.

This ashtray was offered on an on line auction site for months. The seller would put it up for about a week, once each month, and it would get no bids. This went on for six or seven months that I am aware of. The seller had a good description and images, and his price was much lower than other sellers have been asking for the same piece but the shipping cost was crazy. Eventually, I checked the shipping options and saw there was a second option (FedEx) that was half the cost. Still, I dithered for a few months before buying it as the only bidder. I bought it because I like it, but also to demonstrate a point. Sellers on various sites are asking anywhere from $250, not including shipping, to just under $3,000 for these. Crazy. Mine was $75 with $20 shipping and $5 tax. I think that is still a bit high for Japanese production glass. I was going to add a rant section to this post about pricing of production Japanese art glass, but ran out of energy. I may do so later.

While this, and a couple of other recent purchases may seem to violate my monthly art glass budget, I am being patriotic and spending one third of my economic stimulus check to buy art glass and saving two thirds of it. I bought three pieces of Iwata glass, and I will post the other two later. This ashtray is the least cool piece of the three!