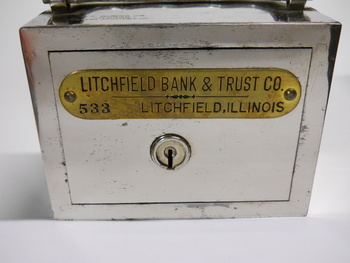 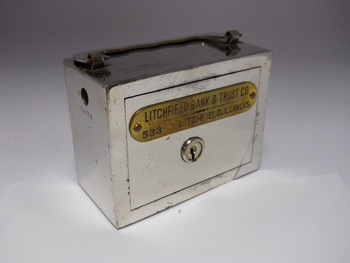 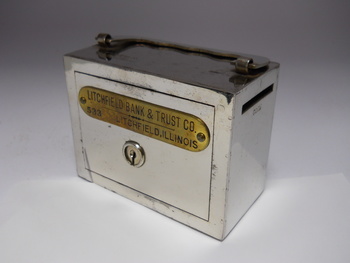 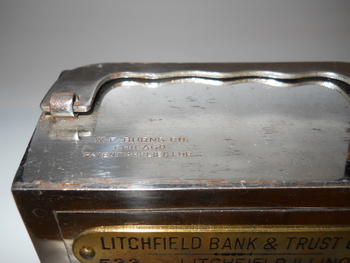 Hello CW Members, Followers, Friends and Visitors.
Here is another Promotional steel bank from my collection, this time electro plate in chrome finish, I really like the chrome finish when it's being take care, this finish could be a real disaster if it's start to pearl off, I see example was a complete lost due to negligence.
This one is bright and very shiny, a proud example in my collection.
From the Litchfield Bank & Trust Company in Litchfield, Illinois, serial #533, stamp on the top" w.f.burns company, patent applied for"

Hope everyone is safe and well.
Many thanks to all of you for Viewing.
Enjoy
Alan

Bank & Trust Co. operates as a state chartered commercial bank. It offers personal banking, business, which includes personal accounts, loans. The company was founded in 1902 and is headquartered in Litchfield, IL.

Litchfield was platted in October 1853, and was originally called Huntsville, after it was thought that Railroad Chief Engineer George Hunt was going to be the one to bring in the railroad.
Earlier, Hardinsburg, about 2 miles (3 km) to the southwest,had been founded about 1850. Both towns were created in anticipation of the Terre Haute & Alton Railroad. Hardinsburg grew to about 50 people by 1854; but when it became clear that the railroad was going through Huntsville instead of Hardinsburg, many of the buildings in Hardinsburg were pulled across the prairie on runners to Huntsville beginning in January 1854, and most of the residents moved to the new site as well, becoming Litchfield's first residents. The railroad reached Huntsville in the autumn of 1864, and within two more years Hardinsburg had substantially disappeared. Only a small cemetery remains of Hardinsburg.
The new town of Huntsville was renamed in November 1855 after Elisha Cleveland (E.C.) Litchfield, who earlier that year had donated land and convinced the railroad of where to place its shops and terminals.
The residents of Litchfield first voted to incorporate as a village on April 4, 1856. However, the village trustees failed to complete the incorporation; the village charter was dissolved in autumn of 1857 and the trustees closed the books for that village government on January 22, 1858. The state legislature granted a new municipal charter to Litchfield on February 16, 1859, and the first elections under that charter were held on March 7, 1859.
Milnot Company, known for its namesake product, Milnot, an evaporated filled milk, was founded in Litchfield in 1912 as The Litchfield Creamery Company by Martin Jensen. In 1916, a new plant was built at 120 W. St. John St. and operated until 1990. As of 2019, it has been repurposed as an indoor sports training facility.