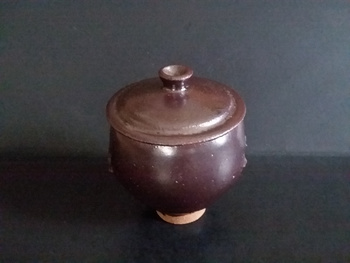 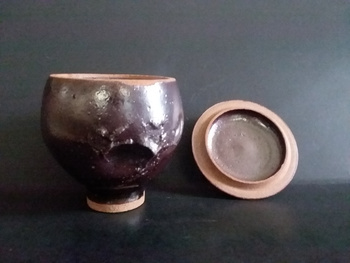 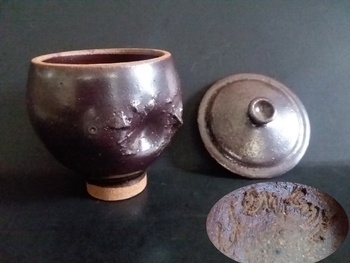 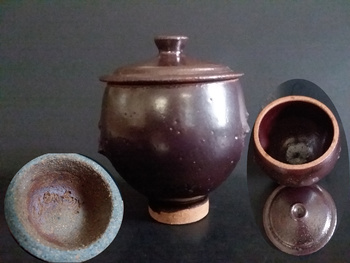 This covered yunomi or chawanmushi cup (?) is 4.25" high x 3.5" in diameter. There were two loose cups in the possessions of the American professor who taught at a university in Japan in the 1990s, one signed in Japanese and this one indistinctly signed in cursive. They were sold as a pair and the other cup was well worth the price asked for both of them. The seller noted that the lot was mostly Japanese items with a few American and British pieces in the pile. This is the oddest one of the pair and of uncertain origins, probably American or British studio pottery. It is heavily glazed and seemingly well made, except for the two indentations roughly gouged into the sides, very roughly, and not cleaned up at all. There are also lots of bubbles in the glaze and a crack that does not seem to go deeper than the glaze. The lid fits very precisely and does a good job of being a lid. I am not sure what to make of this one, but it was super inexpensive, so I thought I would take a swing at trying to figure out what it is. I have seen lots of covered yunomi and this is about the right size but it may also be for eating an egg custard dish called chawanmushi... Guessing it at least qualifies as studio art pottery probably inspired by some Japanese objects, but not Japanese, possibly British or American made... Opinions welcome!