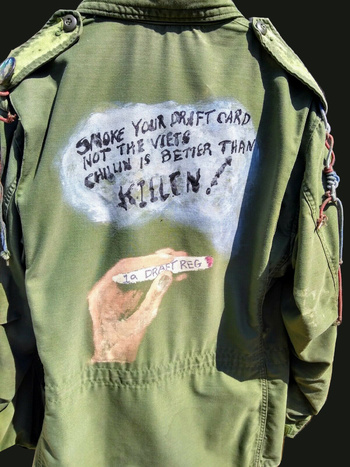 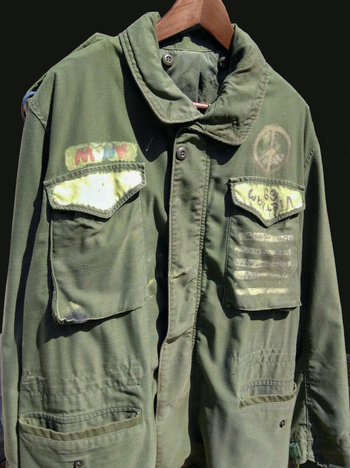 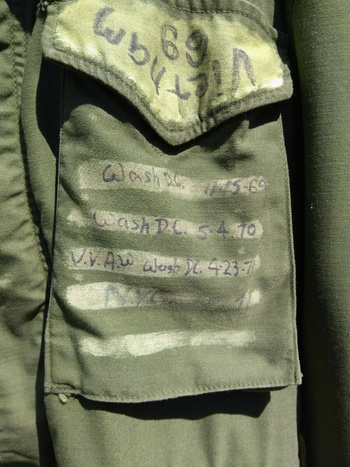 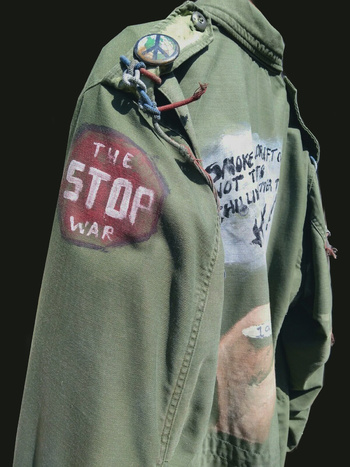 "This Vietnam War protest jacket exhibits the features of a M-65 military field jacket. The original manufactures label has been removed but it is period correct for the listed protest period. This jacket reads like a historical journal of the turbulent times of the Vietnam War.

I acquired this garment several years ago at a farmers/community flea market. I asked about the ownership history and all I could get was they bought it from 'some old guy'. I have examined and researched every inch of this jacket for over 3 years, and this is what I have determined. The 'old guy' was a Vietnam Veteran who turned anti war activist after returning home. The following points of interest are my own summations:

1. The left front pocket flap shows an upside down Vietnam 69. It was still a very hot war in this year.

2. The left front pocket reads like a protest journal. I checked the cities and dates and verified there were war protest at that time and place. Wash. D.C. 11-15-69 - Wash. D.C. 5-4-70 - V.V.A.W. Wash D.C. 4-23-71 This protest also indicates to me that the owner was a veteran of the war. V.V.A.W. (Vietnam Veterans Against the War held a protest in Washing D.C. where where they threw their Vietnam War medals onto the steps of the U.S. Capital Building). The last protest is N.Y.C. ?-??-71 I can't make out the month and date for this one. There was a lot of protest in New York City that year.

3. On the back is painted SMOKE YOUR DRAFT CARD NOT THE VIETS CHILLIN IS BETTER THAN KILLIN! Sounds like the protester has done both. below this phrase is a hand holding a large burning 'blunt Marihuana joint' with 1a DRAFT REG (DRAFT CARD REGISTRATION) used as rolling paper. If you were classified as 1A it was pretty certain you were going to Vietnam. Many protest of the time showed potential draftees burning their draft cards. Many combat soldiers in Vietnam used the term 'I smoked him', rather than I killed him. Thus the graffiti that says 'not the Viets' (don't smoke the Vietnamese).

The size tags for this jacket have been removed but it fits like a Medium Regular. Both of the inside armpit linings are ripped (photo #12). The lower zipper housing is broken, the front snaps work well. There is a zipper hood which is intact. The inside elastic string for tightening for cold weather has been pulled out and is painted and tied to the outer shoulder lapels (see photos). There are numerous pin holes on pocket flaps and shoulder lapels where pin on buttons were fastened. ONE PEASE SYMBOL button remains. There are various slightly visible stains. mostly on the sleeves. There is a visible ink spot on the lower right chest pocket. The collar and the lower pockets show some age related grime on them. Above the right upper pocket shows 'MONK'. The upper inside collar (where the size tag would have been) also is written 'MONK'. Probably the protesters name. Left shoulder has the STOP the war SIGN. The top 'THE', and the bottom 'War' appeared on regular stop signs through out the country. The words STOP and WAR were illegally stencil painted on corner stop signs which was a constant reminder of this unpopular war.

The jacket has been hung in a clean and dry closet for several years. There is no musty odor what so ever. I have not washed or used any cleaners on this coat due some of the paint and colors show signs of deterioration. Probably hasn't been worn or used in almost 50 years. The minor rips and zipper could be repaired with little effort, however I am selling this item as a COLLECTIBLE! If you are a collector of Vietnam War protest buttons you might want to use this garment to pin your collection on and display the whole thing on a wall. It would look (and read) like this most important American History event".