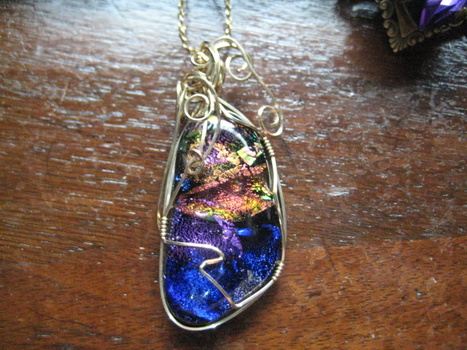 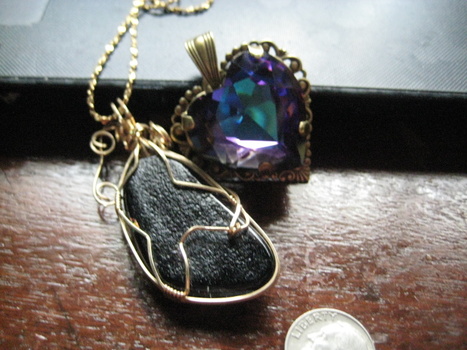 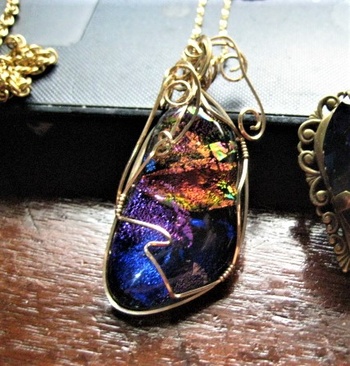 Above is a freeform wire caged DICHROIC pendant. Absolutely Stunning!

Dichroic (pronounced "dye-crow-ick") glass, commonly called dichro for short, literally means "two colored." It is derived from the Greek words "di" for two, and "chroma" for color. It was thus named because of its fantastic multicolored and reflective properties. When you look at this glass, it appears to have more than one color at the same time, especially when viewed with different lighting.

This reflective phenomenon is known as thin-film physics, which is also why you see swirling rainbow patterns in a soap bubble, floating colors from oil on water and the dramatic colors of dragonfly wings.
Dichroic glass became more widely known in modern society when NASA decided to use it in the 1950s and '60s. The difference is, instead of using silver and gold, NASA developed a process to vaporize metals with electron beams in a vacuum chamber and then apply it directly to surfaces in an ultra-thin film. The resulting dichroic glass coating is completely transparent to the human eye and is applied in layers to protect spacecraft technology and astronaut vision from harmful radiation of unfiltered sunlight in space. The complete process may require from 15 to 45 different layers totaling a width that is smaller than a human hair.

This process is now used to make jewelry-making supplies such as colorful beads, pendants and more. When making dichroic glass jewelry, the type of metallic oxides, order applied and number of layers used will determine the final look of the glass. Once the coating process is completed, the whole coated piece is fired in a kiln at high temperatures to fuse the oxides to the glass.

Dichroic glass does not use paints, dyes or any other kind of coloring agent to create its color, but sometimes pieces of colored glass are coated. The coating itself doesn't have its own inherent color; it instead reflects only specific wavelengths. With so many combinations of oxides, glass colors and patterns available to make dichroic glass, the possibilities are endless for incredibly rich and varied colors and patterns. These amazing dichroic design elements add flash and pizzazz, sparkle and intrigue to jewelry, creating a sense of luxury and artistic class.