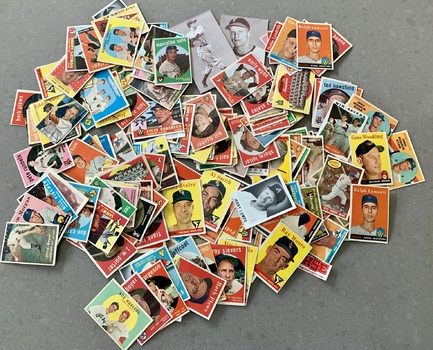 I attended an estate sale in Southern Dallas, The homeowner apparently had Worked for The Dallas Summer Musicals, and The Movie Theaters. I found loads of Playbills and some Lobby Card, press Photos of Movie Stars of the 60's and 70's. I had found some Photos of John Wayne and had posted them in CW at the time I found them. What I didn't post were these cards! I had finished my walk through the house and had paid, I was talking to the lady and I asked with all the stuff in the house had she found any baseball related memorabilia?
She said no not really...... but I found a box of baseball cards would I be interested in seeing them ? Well yeah !! Usually when someone says at an estate sale they have some baseball cards they are for the 80s-90s. Not that interesting, but when she opened the box I tried to contain my excitement. She said I haven't researched them but I'll take $25 for all of them. What a deal ! They where Topps baseball for 1953 - 67 and some Bowman cards too. It's one of those times I'm glad I ask.