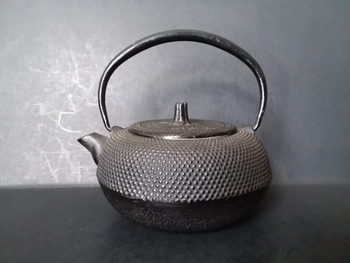 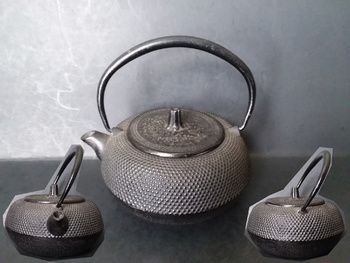 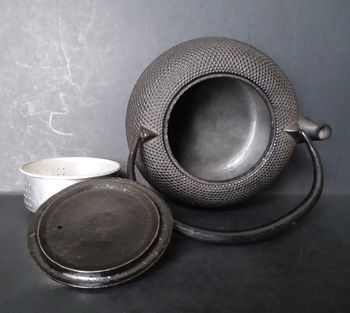 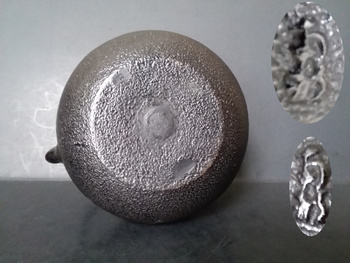 This Japanese tetsu-kyusu is 5.25" in diameter x 2.75" high, minus spout and lid. It weighs in at 2 lbs 4 ounces and holds 18 ounces of water. The original stamped aluminum infuser survives. The design is arare (hobnail) and it is marked somewhat indistinctly. The maker of this pot is as yet unidentified. The seller did not realize it had a maker's mark. It is pretty unobtrusive.

So, why another arare testu-kyusu? First, this is an older pot and has never been used. Perhaps another souvenir, though a bit large for a paperweight, I think. Maybe OK in Texas. The shape of the body and spout are also different from any of my other arare pots. It has a very small spout, which I see more on Chinese reproductions. The same is true for the post finial. I do see this post finial on older Japanese pots but less so on newer pots, though I have a couple of newer Japanese pots with this finial. The placement of the maker's mark is also a bit odd, very low under the spout, near the bottom. The design of this tetsu-kyusu feels a bit old fashioned to me. Maybe traditional is a better word? Probably a vintage pot but not old enough to be antique.

The urushi lining of the pot and lid interiors are the gray-brown that I see on older pots. I can't really quantify what "older" means since information about exactly when applying urushi lining to tetsu-kyusu began has been very elusive. The impression I get is that it started post-WWII. There were a couple of small rust spots inside, but they disappeared after measuring the capacity of the pot.

The total cost was close to my Mr. Scrooge limit, but slightly under it, so I didn't want to pass it up.

After looking through my tetsu-kyusu collection, I realized that my smallest pot has a very similar shape and spout, but a different finial. This is also an older pot, made by a different foundry. 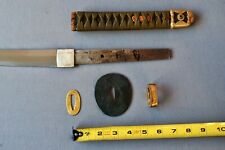 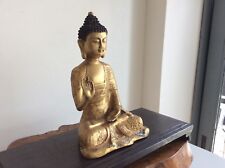