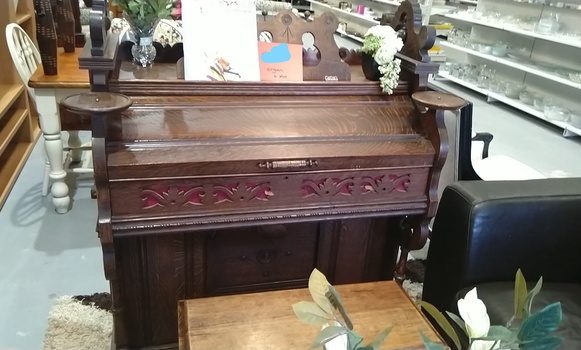 Several months ago I went to a second-hand store and found this interesting organ. I don't play but I could not get over it. 3 mths later I told my daughter about it and we were on our way home from a very busy few days and asked if we could stop by and see if it was still there. I wanted her to have a look and well see if it worked.
I was a little surprised to see it still there and I said to her as she sat down and started to play a small piece from Phantom to talk me out of it. She did the " well where will you put it" I will rearrange the spare room and she pointed out I can't play but she will happily teach me. I said to her the stumbling block will be getting it to my place but the lady behind the counter said they can deliver.
So with no excuse not to, I did.
It will be delivered next week but I wonder if anyone has much knowledge of it. It had it was a Cornish Company Organ. I have been looking about and seen pictures of many but none were the same as this one. I would love to know about its age and wish I could learn its history.