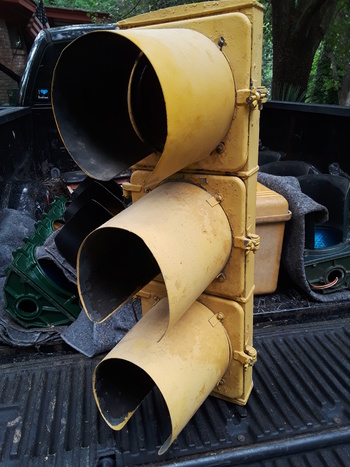 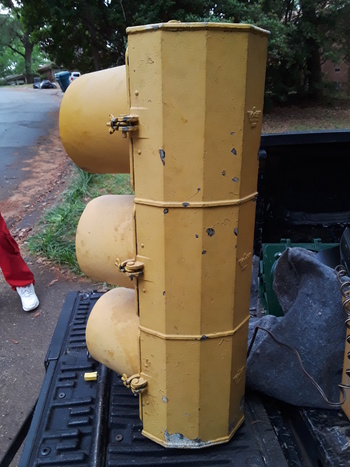 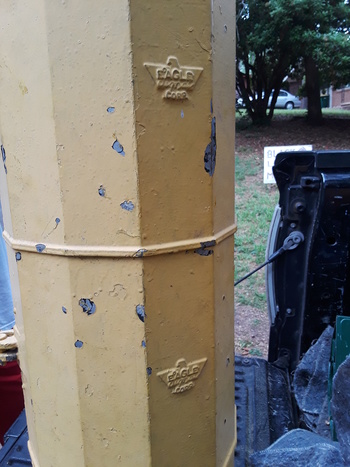 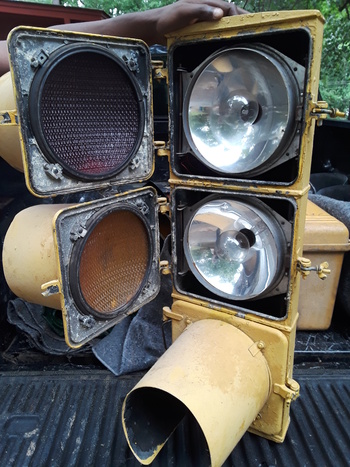 Of all the weird stuff I accumulate, it occurred to me recently that I haven't ever really shared much of my traffic light collection. That might be because I sorta own way more than I can display right now, but nevermind that... <lol>

Here's one of them to get started with. This one saw its civic duty in Detroit, MI and was obtained from a fellow collector(s) who ultimately got it 'as retired from duty' from the City. Perfectly LEGALLY, I might add -- no doubt it was purchased as surplus property. (of which the City of Detroit, notably, has had *lots of* in recent decades, no...?)

This one was manufactured by the EAGLE SIGNAL CORPORATION of Moline, IL and is what's known amongst collectors as a "short-fin Eaglelux" due to the way it is assembled -- the (glass) red, yellow, and green lenses and their light fixtures are held in three distinct sections all fastened together between end caps (that's where the 'fins' are) held together by tie rods that pass through them all. Eagle manufactured signal lights in this style (with variations) from roughly the 1930's - 1950's, this example would be near the later end of that. (due to particular details that don't matter here)

Each of the sections holds a reflector and light bulb/socket in a hinged bracket inside, behind a hinged door that holds the colored lens in front of it and fastens all closed with a wingnut catch for convenient relamping or servicing. Each of the lenses is 8-3/8" in diameter, made of specially patterned glass to disperse the light brightly and evenly in all sorts of daylight or nighttime conditions or differing viewing angles. The lamps used 'in service' are specially designed for the purpose/usage, but are held in otherwise typically sized screwbase sockets using typical 120VAC electricity. It is important to note that there is *no* form of control switching or circuitry within the light itself -- that functioning comes from an entirely different unit located elsewhere in all but very rare traffic installations. (or home collections)

This signal is wearing only the sun faded outermost layer of many previous coats of paint, as it was when removed from service. Detroit is well known amongst collectors for their habit in long past decades of regularly repainting their signals (they called it "maintenance"?) which was a task generally performed by workers in bucket trucks (etc) using heavy brush applied paint -- and they were NOT EVEN neat and tidy about it -- anything that had been yellow before got hit along with the hardware and most anything else nearby, usually including the lower centermost front of the lens. "Slopcoat painting" we call it now and believe it or not, some collectors go to lengths either to preserve it or even to replicate it. (I'll be doing the former with this one)