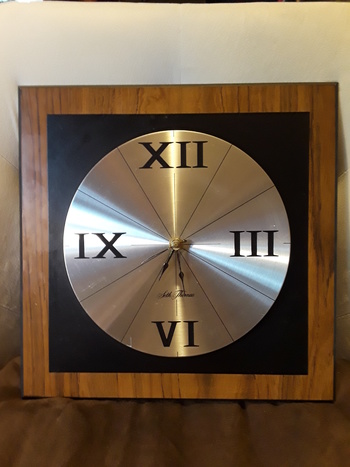 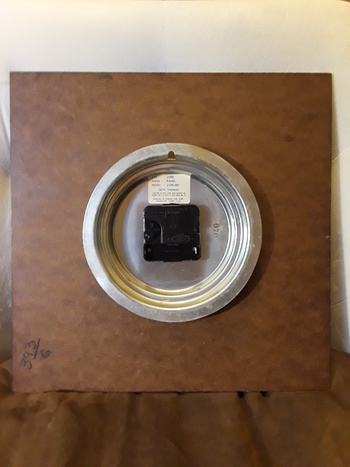 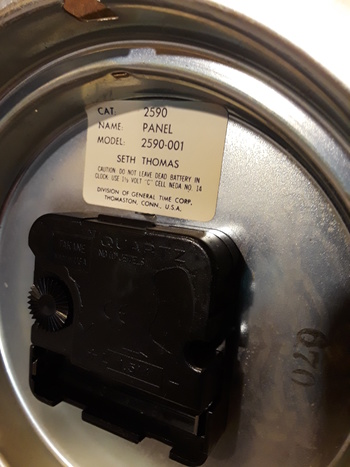 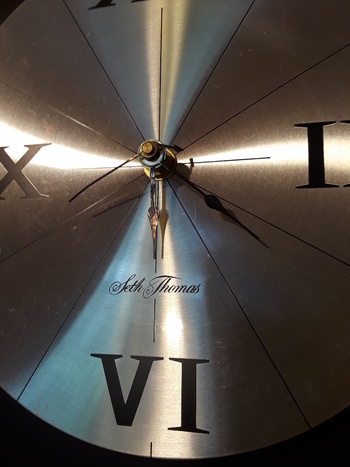 This one snatched up at the Goodwill recently, because I kinda like it and could really use another kitchen clock - the (red/chrome plastic) one I had quit working and my partner stuck a newish LCD whiz-bang digital multi-display thing up there instead that I can never see when I want to...it needs to go away the next time nobody's paying attention... ;-)

This one is (was) a Seth Thomas model called "Panel", design #2590 according to its original label still on the back. Basically 12" square, I didn't notice until getting it home that somebody has actually replaced its movement -- the shadow of the larger original still remains on the backside if you look close (pic 3) but is difficult to get in photos. It is entirely possible the hands have been replaced as well, at the least they have been 'colored' with a black Sharpie (etc) as can be seen in pic4. They are also all bent up and loose on the new movement, I haven't even tried to bend them back and reaffix until I maybe find out if they're original or not -- if not, maybe even if so, I'll likely look for a new slightly bigger and maybe more appropriately shaped set the next time I'm at a craft-kinda store -- they aren't really easy to read no matter whether black colored or shiny gold.

Not captured in the pics here is how the clock is put together. The backside ring (pic 2) that holds the movement keeps the square 'panel' (genuine Masonite (tm)?) about 3/4" away from whatever surface the clock hangs on, and the brushed metal face also stands off the front surface a little over 1/2", giving the whole look of the thing a little more "depth".

I don't know how old it really is but will guess 1970's if not a little older, at least since it is still labeled as taking a C-size battery cell instead of the now ubiquitous AA's that come with modern clocks. (and indeed this one now has) I haven't researched it very much, just enough to find bunches of pictures of other Seth Thomas clock models, and to figure out what its 'name' and 'model number' were from its label.