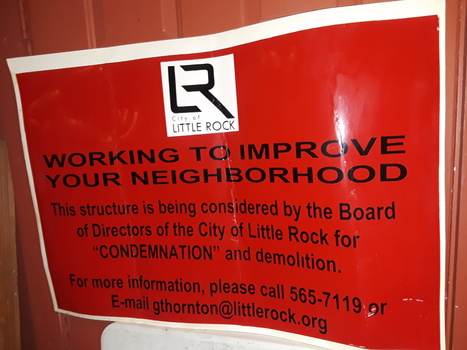 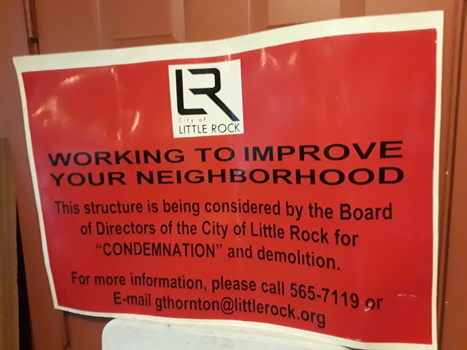 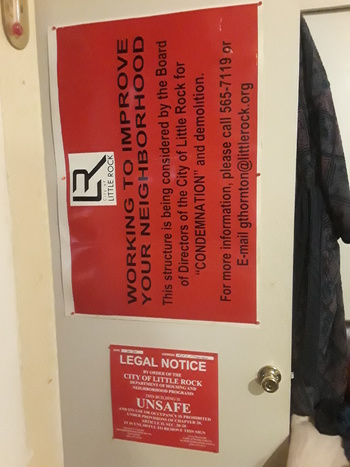 The city had a little PR burst a few yrs ago (prolly prompted more by some politician coming or going than anything else, but whatever) when announcing they were gonna "fight blight" by cleaning up (tearing down) a couple dozen or so (?) dilapidated houses, to "improve the neighborhoods".

So's ultimately the contract$ were awarded, these signs went up, and indeed a good handful of basket-case dwellings (mostly burnouts) got scraped away to make just that many more lovely blank lots in the 'hood. <rolleyes>

This sign was in fact recovered from a fresh pile of one of those knocked down houses only hours after the backhoe first did its thing, before the dumpsters started arriving the next morning to haul away the chewed up debris. It got a few creases in process, but I'm still surprised it survived the initial demolition at all...?? It measures 2' x 3', made of plastic coated cardboard.

New pic #3 to show that I found a spot (door) where both my red cardboard 'condemned' signs can hang, together! :-) (even if the big one is sideways)