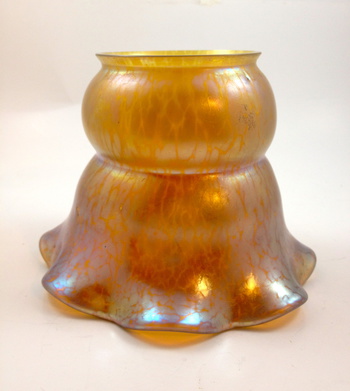 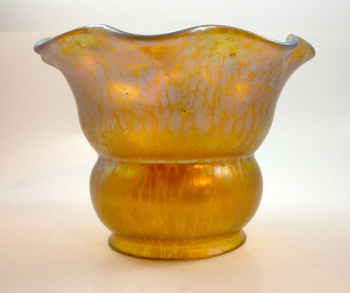 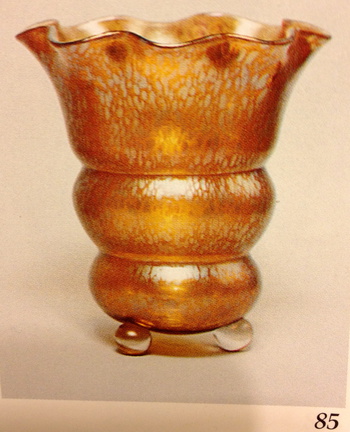 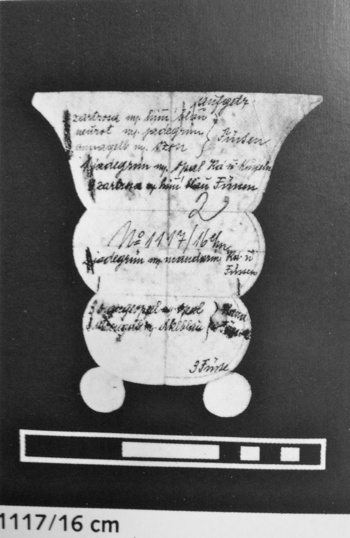 So I bought this very pretty lamp shade, recognizing the decor as Loetz, but curious as to how the shade has an unusually large fitter size (3.oo"), along with the fact that no shades of this type are listed in Ricke 2. There is a similar shaped vase in Ricke 2 (Serie III, 1117 - see last photo scan), but it does not have ruffles. In my last post I talked about rim variations on documented shapes (the shapes probably have numbers, but they are not listed in Ricke 2). While browsing through Collectible Bohemian Glass, 1889-1940, by Robert & Deborah Truitt, I found the vase that corresponds to the lamp shade, ruffled rim and all* - a little too closely, actually. I believe that the lamp shade started out life as a vase, and for reasons unknown (probably damage to the ball feet or something similiar), a clever solution was found - cut the vase off evenly just under the second waist, forming the fitter rim for a lamp shade! I had to order a 3-1/4" fitter ring, which hasn't arrived yet, but I hope to have photos of it lit up before too long. Even though it didn't start out life as a lamp shade, it was an elegant solution to salvaging a (presumably) damaged piece. I really like it!

*furthering the point that variations on rim types were not unusual for Loetz. In fact, some pieces came in both flat cut rims and fire polished, depending on which decor was used on a particular piece.