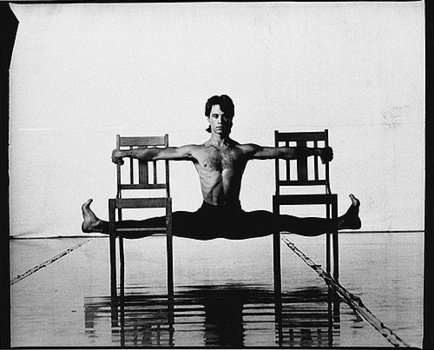 A new apartment in 2000 meant some purchases for the pad. This photo was one of two that my partner and I bought from a Sydney dealer Josef Lebovic in 1999.

It's a photo of an Australian icon Paul Mercurio.
The photo says it all about Mercurio, the star of Strictly Ballroom.

"Greg Barrett is one of the world's foremost photographers with a special interest in bodies in movement both within a commercial context and the performing arts. ??He has worked extensively in film direction, feature film Gallery stills shoots, fashion photography, advertising and portraiture. ??His photography is widely collected and seen as a reference point for the possibilities of what the human body can achieve in non-verbal expression. ??Greg's first book, danceshots, was published in 1993 and his second, the critically acclaimed tutu, was published in 1999."

"His [Barrett's] portraits of the Australian Ballet Company are striking and as sexy and hip as a fashion shoot. Tutu captures members of the company free from the formal constraints of performance in poses that are frequently outrageous. As stylised as fashion and as skillful as choreography, this is a visual treat."
The Times - London

"Born in Swan Hill, Victoria, Paul Mercurio grew up in Perth, Western Australia, with his mother and three siblings. He began dancing at the age of nine, inspired in part by watching musicals at Saturday matinee movie screenings. He attended John Curtin High School in Perth and his theatrical interests were nurtured there as a result of the school's performing arts curriculum.
Mercurio was a scholarship student with West Australian Ballet and choreographed his first work, Just Another Poor Boy, during that period. In 1981 he left Perth to study at the Australian Ballet School but left after a year. He began his professional dancing career with Sydney Dance Company, which he joined in 1982. With Sydney Dance he performed in many works choreographed by Graeme Murphy and was acclaimed in particular for his performances as Tadzio in After Venice and in the leading role of the Voyager in Some Rooms. While with Sydney Dance he choreographed several works for the company including Waiting and Dancing with I in 1989, Cafe in collaboration with Kim Walker, also in 1989, and In the Company of Wo/Men in collaboration with Murphy in 1990. In 1990 Mercurio took leave from Sydney Dance Company to take the leading role of Scott Hastings in the film Strictly Ballroom. On the completion of Strictly Ballroom he returned to Sydney Dance Company and choreographed Edgeing in 1992.
In July 1992 with the support of grants from the New South Wales Ministry of the Arts and private donations, Mercurio established his own company, Australian Choreographic Ensemble (ACE). At the same time he established Feel Good Films. For ACE Mercurio restaged several works he had choreographed for Sydney Dance Company, created new works and commissioned choreography from others. ACE disbanded in 1998."
http://trove.nla.gov.au/people/492912?c=people

We also bought a portrait of Graeme Murphy from the same series.