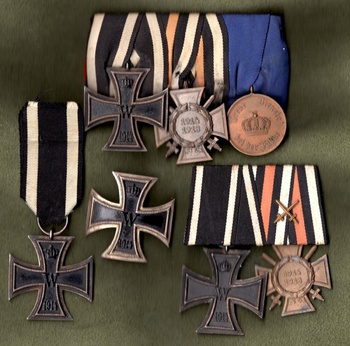 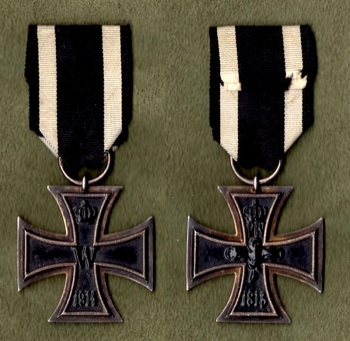 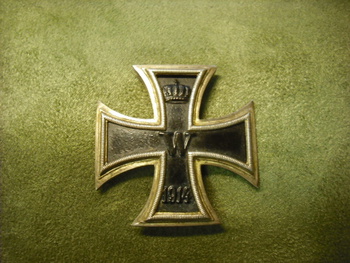 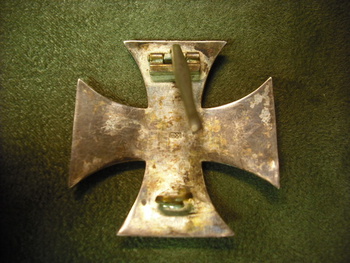 Today I’m posting my WWI Iron Crosses. Although I’ve spread these out over two postings, I grouped them all together in the first shot for no other reason than I thought they looked cool all together.

The front of the crosses bear the crown and W for Kaiser Wilhelm, and the date 1914 at the bottom of the Iron Cross indicates the date the cross was re-instituted (5 August 1914) The Iron Cross was first instituted in 1813, as marked on the back of the second class cross, along with a splay of oak leaves in the center and the crown and royal cypher of Friedrich Wilhelm, who reigned at the time.

During WWI there were three classes of Iron Cross and one star: Second Class (millions awarded); First Class (about 218,000 awarded); grand cross (exactly five awarded); star to the grand cross (one awarded). So, the reality for a poor WWI collector like me is that I’ll only own a first and second class.

Picture 2 is the Iron Cross Second Class (Eisernes Kreuz 2. Klasse, or EK2 or EKII). It has a maker mark “D-W” on the suspension ring. This is the usual place to find makers marks on the EKII. It appears to be the traditional construction: a two piece silver frame surrounding an iron core. At least the frame tarnishes like silver and the core is magnetic.

Pictures 3 & 4 are the Iron Cross 1st Class. (Eisernes Kreuz 1. Klasse, EK1, EKI). It is definitely a two piece frame with magnetic core. (The frame is beginning to separate around the upper edge) This example is slightly domed, others are flat. In the center of the back is a mark indicating 800 silver content (80% pure silver). Silver marks for Iron Crosses are often 800 or sometimes 900. 925 is the standard for Sterling Silver. Some yellow appears in the last photo. That’s a trick of the lighting. It’s silver tarnish.