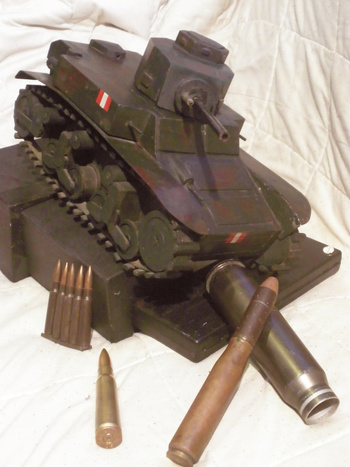 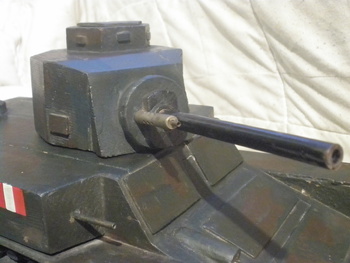 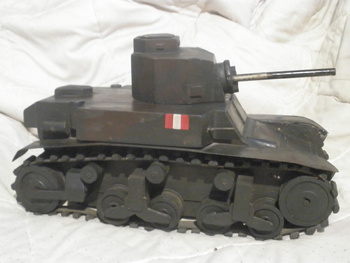 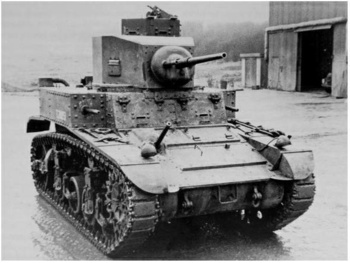 First let me say that I need some help from the WWII guys, I need to know what Canadian units were using Stuart tanks during the war so I can try to track this thing. Some shallow digging came up with "5th Canadian Armoured Regiment", but I haven't gotten any specifics.

Anyway... This 14" long monster is large and in charge, not to mention highly detailed and accurate. Each piece of thick grain wood is unique, implying that it was not professionally made but instead made with enthusiasm. The person who made this wasn't perfect, but they cared enough to make many many little details.

The machine guns are made with thin brass pipe. There is a hand machined cooling shroud on the barrel of the coaxial machine gun on the turret (which I absolutely love).

The treads are canvas straps with individual pieces of irregularly cut angular dowels glued on.

The fenders are made with steel, what is interesting is that they are covered with *welding slag*, implying that they were probably scraps from a larger job.

The red-white-red marking on the sides designates a Canadian tank, which is a rather peculiar, very specific thing to put on a model tank. It was an American tank and most were used by the Brits during the war, so someone would have had to have a good reason to make this Canadian. **see comments below**

All the little details come together, I'm inclined to think that this probably was not made by your average guy in his garage. Even if it isn't wartime, I'm almost certain it was vet made.

I got this from England, took over a month to get here since it was sent by ship! I was beginning to think it wasn't going to show up.