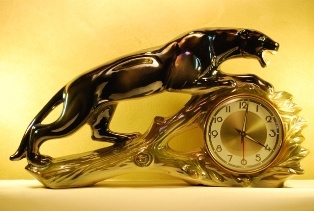 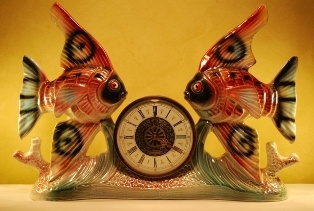 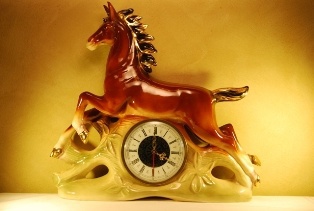 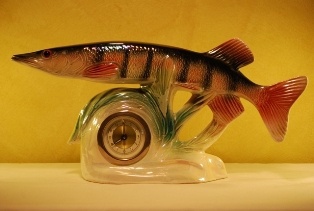 Jema Holland Clocks were made roughly between 1940 - 1955, in holland by two brothers Jelis & Willem Mager - The name Jema came from an amalgamation of these two names "Je" from the brother Jelis & "Ma" from their surname - They made 82 only style clocks that I have identified so far, numbering from the earliest number (398) to the last one made that I have recorded (480). Presently I have over 43 in my collection, all working & only one or two that have minor dents. I also collect the Jema Holland Lamps & have 13 of those.
My interest became so strong in these superbly crafted clocks that I even built & own a website dedicated to them (see www.jemaholland.com) I myself do not collect the figurines that Jema Holland made as there are close to 800 of them but I have started to add my register of photos onto the www.jemaholland.com website so that it can become a collectors resource.
Having commenced business officially in 1945 but having already traded for a few years prior, the Mager brothers by about the early 50's were really producing some well crafted 30 hour clocks, the artisans responsible for the designs were very skilled and they produced a large array of creatures from birds, fish, local animals & exotices such as the lion clock or the double elephant clock, the fish clocks are eagerly sought after by fisherman as collector pieces and probably fetch the most at sale.
By the late 70's though the Jema factory was in decline, they had stopped producing the clocks & lamps & the figurines had become quite basic not surprisingly by 1984 the Jema Holland business went broke & ceased production altogether.