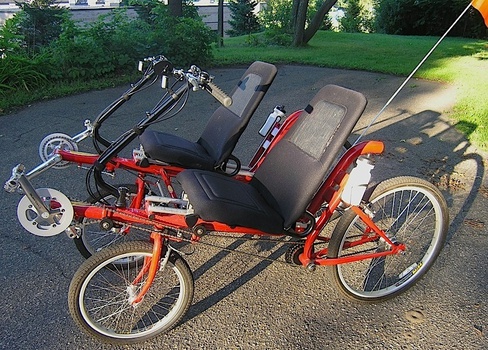 Called a BuddyCycle and was made by a company called BuddySports in California. I don't think they are still in business.
The bike is set up to operate independently (regarding shifting, braking and pedaling but not steering) and has internal 7 speed hubs.
I got it from a family that used it so their handicapped child could participate in riding with them. They decided to let it go because the extreme weight differential of child to parent (45 lbs. to 220 lbs.) made it want to lift up on the light side in a sharp turn. They never had an accident but it spooked them a few times and that was enough. I never had that problem because my kids were closer to my weight and my daughter used it more with friends about her size. She did take it out occasionally with our Jack Russell Terrier and had no problems.