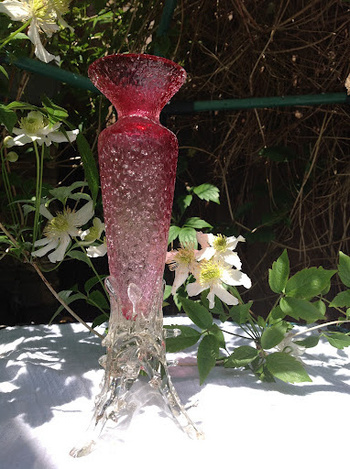 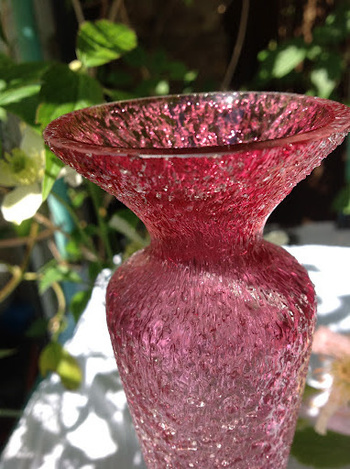 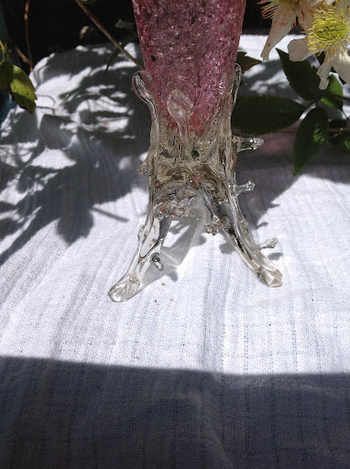 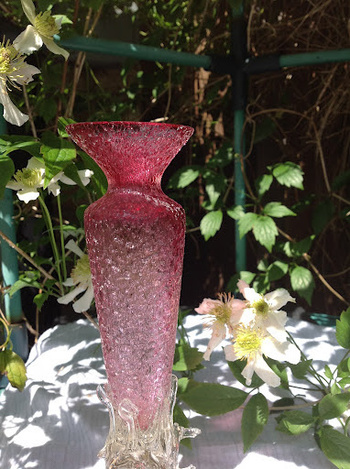 So, frit is new to me. I'd guess this is Bohemian, not British, but beyond that I hesitate to step into the debate as to attribution.

I have now amended this posting, and removed a great deal of previous comment, including my own, as the attribution has led to some heated discussion.

ChuckieCzech gave me some detailed information as an aid to identifying this vase, in a number of different posts. A lot of his information came after Obscurities' first comment below, but both before and after his second comment, just to give you the context.

I hope ChuckieCzech won’t mind that I have collated his posts to make his expertise, his attribution, and his detailed reasoning, available to you:

"I vote Kralik and have a similar one in clear.
The Butler Brothers Monoogram 121, page 2, shows a vase in a different vase shape but with the tadpole shaped up-pulls yours has. These tadpoles were used by Kralik on other shapes.
http://569ef951-a-62cb3a1a-s-sites.googlegroups.com/site/loetzandglass/kralik-4--opalescent--reticulated-vases/TREARDROPS%20TGROUP.JPG?attachauth=ANoY7crpjs3QzL_R3ty7Em-sIfYb554CxFHAQSLyoYhkqXzd_URTtnOVrCWXm06ll1TR3FqzZ4lFAzBmrhFnDkyA81mYCJPyymkH3YbqAIvuxkdKfzjZwNXbYpYrefteenkg4jp9DLpfUtDpqVxRadPYh-torth8T2AD0WKIJC9HRPecYKhabBMdzBld1cca1qVbU1vugHG0HprmLs3LzuLAgpeXV6wxtt_jJ-RCfT0KygCUTeD-7j-DD1Pgt4MZ-ikHlhtFMP4syG7yA7rxFmgk6YL5T81G2Q%3D%3D&attredirects=2

There are many more examples of Kralik Teardrop shown on http://www.Kralik-glass.com

The downard legs are a continuation of the teardrop pattern as the pulls are droplets, not thorns. Like a splash!

I have Kralik thorn vases with these same rounded leg thorns. Yours are exaggerated and more toe like than the typical Kralik thorns but made in the same style. Stare at picture 3 long enough and you will see a spash patern for the clear feet.

Like Obscurities said in his first paragraph. "These can be tough to attribute unless of course the same shape piece is found in a decor which can be linked to a specific company" The teardrop decor shown on your vase shape is linked to Kralik as this exact decor was used on other Kralik vase shapes.

I'm not an expert nor do I claim to be. I do collect Kralik however and feel confident that your vase is Kralik. British / Stoubridge thorn vases do not have cut rims nor are they constructed with cased glass tubes.
In Kralik tube vases with graduated coloring, it is the cased glass tube that give this effect. There's usually more clear at the closed end of the tube and a thicker color casing layer at the upper parts. My guess is that this vase is cased in clear outside with clear frit while the color layer is inside. The clear part of the cased Kralik glass tube often has a slight reaction to UV Light whereas the cranberry doesn't and turns purple under black light. A black light will help you see that it is cased and the right side rim of picture 2 shows the thin color layer hiding behind clear cased glass.....
I've studied your vase for a very long time and was glad to see it posted for discussion. I'm here to learn too. I have around 30 Kralik thorns lined up here to compare to yours including an example of the piece in question. In my opinion and based upon this side by side comparison your vase is Kralik.
Long live Kralik!!!"