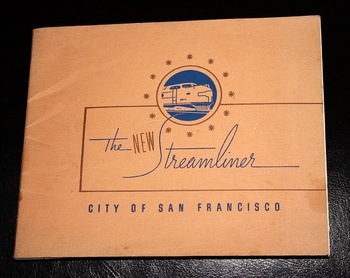 Here's an interesting old brochure for a passenger train which ran from Chicago to San Francisco. It isn't dated, but i think it's from when the train first began in 1936. According to Wikipedia: 'On August 12, 1939 the train derailed while crossing a bridge near Carlin, Nevada, killing 24 and injuring 121.' and then 'The City of San Francisco is perhaps best remembered for the January 1952 event when a blizzard in the Sierra Nevada Mountains entrapped the train for six days at Donner Pass, California. The incident occurred when snowdrifts from the blizzard's 160 km/h (100 mph) winds blocked the train, burying it in 3.6 meters (12 feet) of snow and stranding it from January 13 to January 19. The event made international news headlines. In the effort to reach the train, the railroad's snow-clearing equipment and snow-blowing rotary plows became frozen to the tracks. Subsequently, hundreds of workers and volunteers, including Georg Gärtner, using manual snowplows, tractors and manpower came to the rescue by clearing the adjacent Lincoln Highway to reach the train. The 196 passengers and 20 crewmembers were evacuated within 72 hours, on foot to vehicles that carried them the few highway miles to Nyack Lodge. The train itself was extricated several days later.
In 1955 the Milwaukee Road replaced the Chicago and North Western between Chicago and Omaha; in 1960 the City of San Francisco was combined with the City of Los Angeles east of Ogden.'