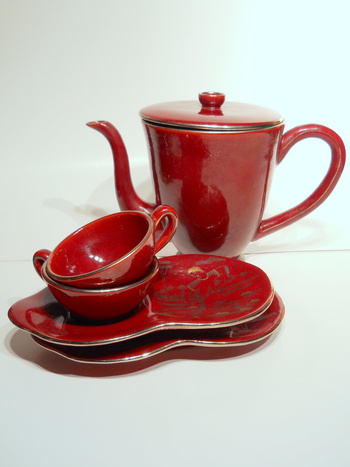 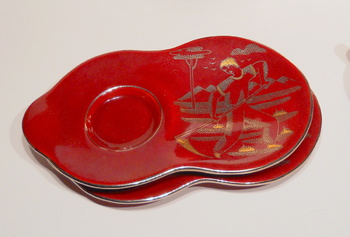 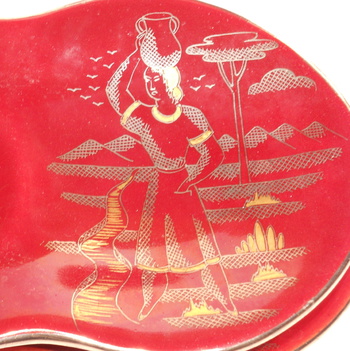 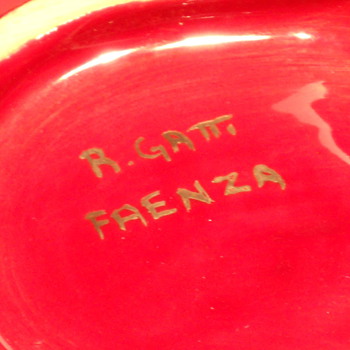 This gorgeous coffee service by Riccardo Gatti (Faenza, Italy) took me far outside the boundaries of my usual "comfort zone" (my main focus is on American wares), but I absolutely fell in love with it and couldn't resist taking it home. There are eight cups and saucers - as you can see, the saucers have a built-in area to hold your biscotti while you sip. The designs, executed in gold and silver, are all different but have similar pastoral scenes. The edges of all pieces are also trimmed in silver. The saucers bear the mark "R. Gatti Faenza."

Gatti was born in 1886 and worked for other companies from 1908-1928, at which time he established his own studio, Bottega d'Arte ceramica Gatti. During the period of 1928-29 Gatti established collaborative relationships with many important Futurist artists, including Giacomo Balla, Benedetta Cappa Marinetti, Mario Guido dal Monte, and Gerardo Dottori.

Gatti died in 1972, and the studio has continued under succeeding generations of the family, remaining active today.

I have a couple of inquiries out to try and narrow down when this set might have been made. It has a 1930s feel, to me, but that's entirely a guess at this point.