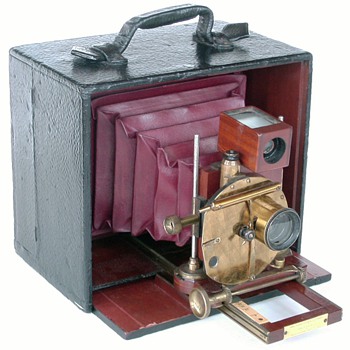 This camera is one of my favorites for a couple reasons. First, it is rare and historically important. But more importantly, this is the camera that moved me from being a casual collector to researcher / historian of early photographic apparatus. It was undocumented at the time I acquired it in 1997, and research took over a year to finally identify the specific model and date of build. The effort led me to contacting and getting to know many of the collecting elite as well as meeting the technology curator at the George Eastman House. The thing that struck me was how closely knit the camera collecting community was in helping each other out.

As it ended up, this particular Henry Clay camera dates to 1891 and is historically important as the first American self-casing camera (a camera that folds into its own case to protect fragile parts) to shoot glass plates. This original model sold for $50 in 1891; or the equivalent of $948 in year 2000 currency - a very expensive camera for the time. It’s quite rare with only a couple examples are known.

Yet my fondest memory was how it was acquired. I used to travel to Milwaukee weekly for work, and one day I stumbled upon an antique show during lunch. Inquiries to dealers about early cameras pointed me to a local resident who was known to have a decent collection. Better yet, he and his wife were florists with their own shop, so it would be easy to meet.

After a couple days of phone-tag and camera bantering, the seller brought two cameras to his shop. But if you were visiting the business at the time, seeing the two of us haggling in the middle of a dirt parking lot on a hot 90+ degree summer day with car trunks open would have looked like something a bit illicit.