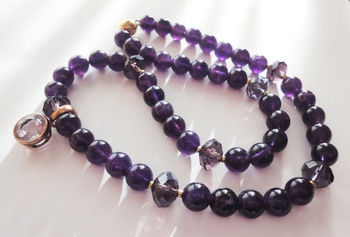 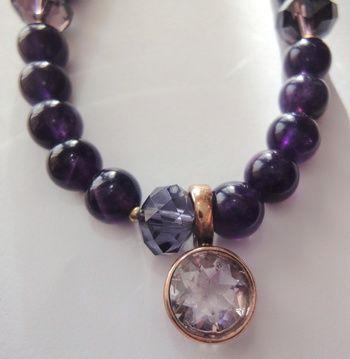 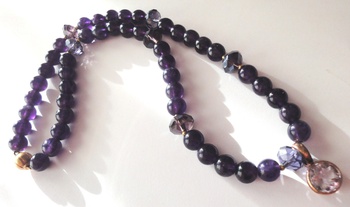 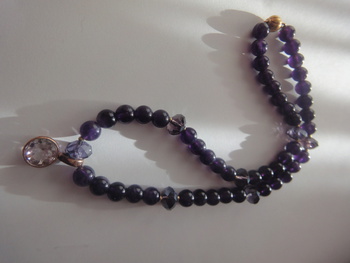 An Amethyst bead necklace with an 9cr rose gold (German)Amethyst pendant. This pendant can easily be opened and closed so easy to use on all kind of necklaces.
I have bought this necklace in a German city with the name: Ida- Oberstein. a The necklace is made of beautiful round Amethyst beads with 5 purpe crystal beads and some little gold beads between. It has an an easy gold colored magnetic clasp so very easy to open en to close.

Some history of this import jewelry city Ida-Oberstein in Germany:
On individual drawings of the today's city numerous certifications are pre and to early historical settlement. Here it however obviously concerns scattered single addresses, which do not have to do anything with the today's community. After the departure of the Romans around 400 n.Chr. it probably gave no continuous settlement more. In the year 1075 the first knight is mentioned by (upper) stone. The castle Bosselstein built by the family stone is mentioned for the first time documentary 1197. In 13. Century resulted from a marriage of the family Daun the dynasty Daun Oberstein. This took over the possession of the rule Oberstein and builds around 1320 the lock Oberstein.
A successor of this dynasty, Wirich IV. from Daun Oberstein (1432-1501), built also in the years 1482-1484 the rock church, which is considered today as landmark of the city. In one of the valuable gothical Glasfenster of the today's vestry still another picture is received from it. After 1375 were already mentioned documentary for the first time the dismantling by agates and other jewels, documents occupy the dismantling in the jewel mines in the Steinkaulenberg from the years 1454 and 1497 also. In addition 1497 issued the Mr. von Oberstein a regulation, which forbade the export of Rohsteinen from the rule Oberstein, threatened with the delivery of each third hundredweight to the Mr. von Oberstein required and with offences the death penalty. In the year 1497 the foundation-stone for the today so important jewel and decoration industry was thus put, which celebrated its 500 year existence in the year 1997. On the processing of the stones for the first time in the year 1520 one reports.

EXCEPTIONAL PAIR OF GOLD ANTIQUE A...
$179
See all