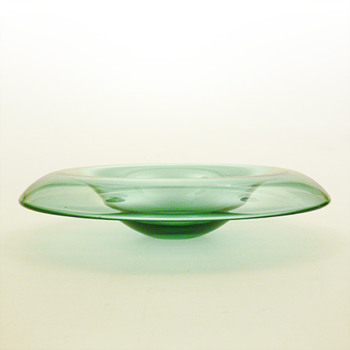 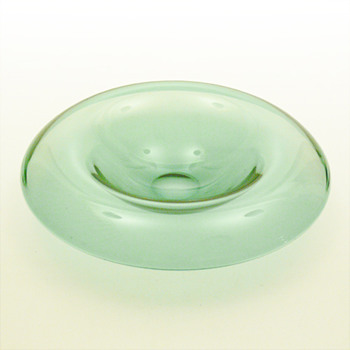 It's been a long time since I haven't uploaded a new item... well, you know that at some point I run out of pictures of the different items in my collection as I have been delaying taking their pictures. Well, last year hasn't been a good one for me and I've been busy with so many things that what I planned to do in the Summer of 2012 I started doing today, January 31st in 2013.

I also wanted to upload something special as this makes my item No. 300 here at CW.

This amazing bowl was one of Carlos's presents for our first anniversary last September. I had always seen it refered to as "Kraveskål" (sort of "collar bowl"), but it wasn't until recently I found out it belongs to the EVERGREEN series. Once again Lütken named one of his series after the colour their pieces were made in. And it is a beautiful green!

It meassures 39 cm. in diameter (which makes it quite impressive) and weights 2350 gr. You see it's a huge, beautiful piece of glass. Unfortunately it isn't signed at the bottom but bears the "2" sign that tells us it was considered second class when they made it at Holmegaard... well, I have to say there is only one small bubble that may give it its "second class" condition, so it really doesn't worries me, not at all! :)

Well, now that I've started taking the pcitures of my collection (and cataloguing it, the toughest of tasks!) I'll be sharing them here with you. I hope you will enjoy them as you did with the previous 299 ;)