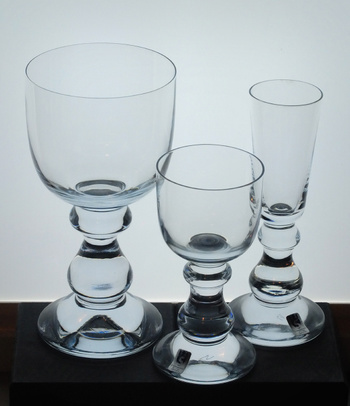 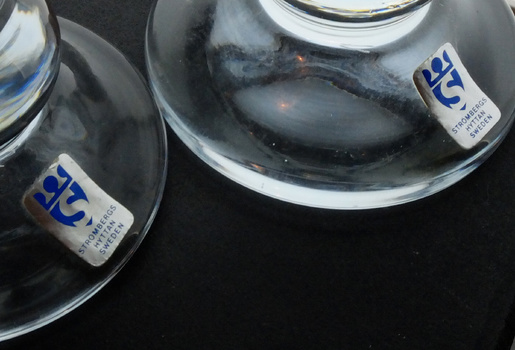 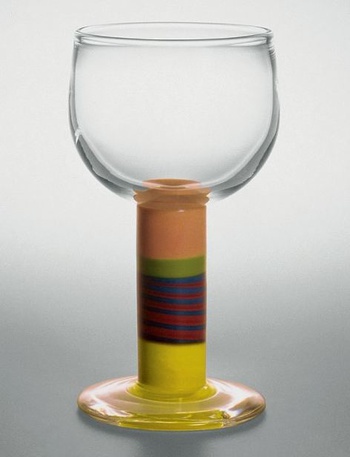 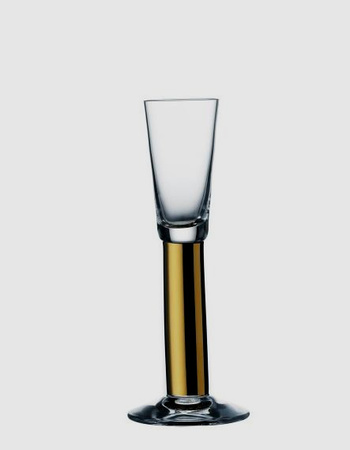 Showing these tableware glasses from Strombergshyttan (picture 3 and 4 is Orrefors products), inspired by vetraio50 here:
http://www.collectorsweekly.com/stories/81015-strombergshyttan-goblets-gunnar-cyrn?in=441
It is a tableware called Allmoge that comes from after the time Orrefors took over in 1976, and is an attempt to renew the range at the factory. After a while, Orrefors felt the blue tinted Stromberg-crystal unsalable, and therefore started to produce this dinnerware in a smoky grey nuance. Which one was best-selling, I do not know? What you prefer have certainly to do with how the environment in the dining room looks like, I can imagine? And why Orrefors no longer wanted to produce the blue tinted crystal I can't understand? Personally I think the forms in the glass will be better reproduced for the eye with the slightly bluish Stromberg-crystal.

Designer is, what my parents have told me (my mother worked in the factory sales in the last years), Gunnar Cyrén, who was drawing glass for Orrefors in that time. They wanted to modernize the design in Strombergshyttan, especially the old tableware range, mostly designed by Gerda Stromberg in the 1930's and 40's. Cyréns Pop range from Orrefors (third picture), but even the Nobel serie (fourth picture) and somewhat Herrgard, reminds of these in basic form. So I'm quite sure Gunnar Cyrén stands behind this tableware range produced by Strombergshyttan in late 1970's. The only alternative by that time could possibly be Olle Alberius, but I have no memory he was mentioned in connection with Strombergshyttan at all? Edit: Today it has been confirmed that Gunnar Cyrén is designer for "Allmoge", by masterblower Jan Joansson, and his wife Ann-Marie, who both worked at Strombergshyttan the last years until 1979. They also said that Cyréns tableware serie "Herrgard" was designed for ,and produced in Strombergshyttan for the first. Allmoge had also celter glass, bowls and lantern/candleholder.

Orrefors introduced also a new sticker for Strombergshyttan (a typical 70's as I see), and in the bottom of the glassware they now signed with an S (se trough the foot in first picture). I don't think so much glass of this tableware serie came out before Strombergshyttan closed down in 1979. What I have seen these are more sought after in the collectors market than older tableware glass from Strombergshyttan, at least here in Sweden.