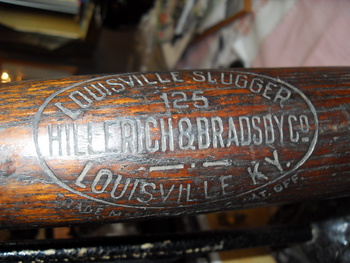 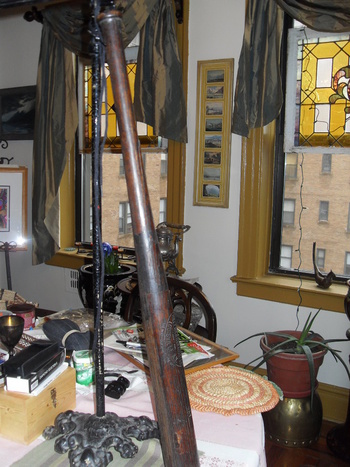 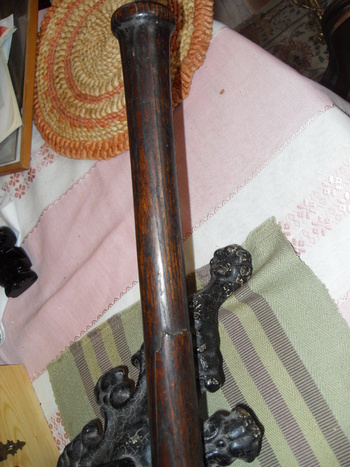 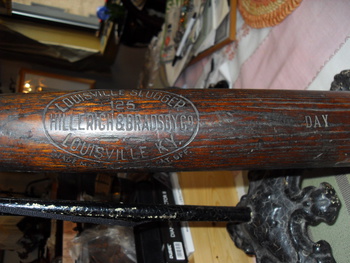 This baseball bat is an antique bat that is a LOUISVILLE SLUGGER NO. 125, HILLERICH & BRADSSDY CO. ,made in Louisville , KY.
Marked with the ownership name DAY (Bill Day), the bat is made of oak and measures 38 inches in length and approximately 1 3/4 inches x 2 1/2 diameter in diameter. The bat appears to have been broken during a major league game over a hundred years ago and has excellent pertina.

William M. Day (1867–1923), was a Major League Baseball pitcher who was born July 28, 1867 in Marcus Hook, Pennsylvania. I have no information on his battling. But, he was a right handed pitcher. He made his first appearance in August 20, 1889 for the Philadelphia Quakers. His last appearance was in October 3, 1890 for the Pittsburg Alleghenys. Bill Day as he was called, Career statistics was as follows; Win–loss record 1-10, Earned run average 4.66 and Strikeouts 39.
He played in 1889 and 1890 with the Philadelphia Quakers/Phillies and the Pittsburgh Alleghenys. He was still playing professionally in the minor leagues through 1904.

LOUISVILLE SLUGGER BASEBALL BATS
This phenomenal baseball bat is one of the earliest ring bats that we have seen. This unique vintage bat was hand made and features rings in the knob and handle area as well as a black tip. These markings are typical of 19th century baseball bats.

In many ways, the rich, 120-year history of the Louisville Slugger baseball bat began in the talented hands of 17-year-old John A. "Bud" Hillerich.

Bud's father, J. F. Hillerich, owned a growing woodworking shop in Louisville, Kentucky, in the 1880s when Bud began working for him.

Legend has it that Bud, who played baseball himself, slipped away from work one afternoon in 1884 to watch Louisville's major league team, the Louisville Eclipse. The team's star, Pete Browning, mired in a hitting slump, broke his bat.

Bud invited Browning over to his father's shop to make him a new one. With Browning at his side giving advice, Bud hand-crafted a new bat from a long slab of wood. Browning got three hits with it the next day.

Some 120 years have passed since Bud Hillerich crafted that very first bat for Pete Browning. During that time, Louisville Slugger has sold more than 100,000,000 bats, making it without question the most popular bat brand in baseball history. Louisville Slugger continues to dominate the game in both wood and aluminum bat categories. 60% of all Major League players currently use Louisville Slugger. And in the past decade, seven national college baseball champions hammered their way to the top with Louisville Slugger TPX bats.

So what would baseball be like if young Bud Hillerich had followed his father's urging and devoted his efforts to making swinging butter churns? We don't even want to think about it.

I welcome any and all information pertaining to this article.