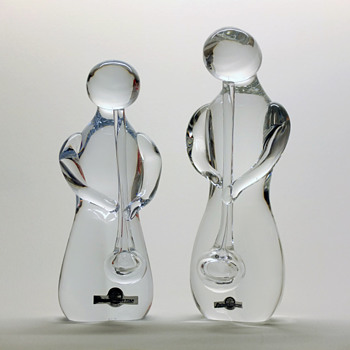 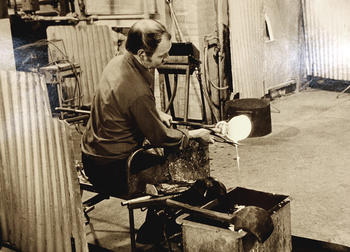 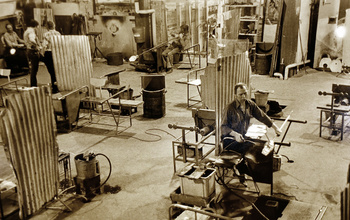 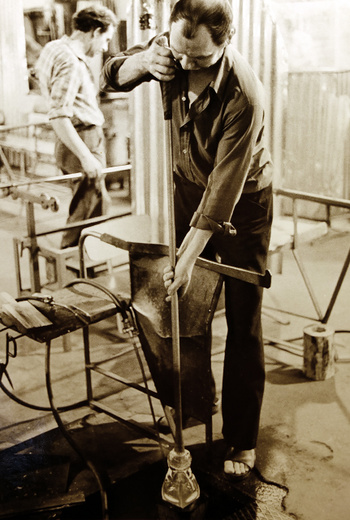 These two glassblower sculptures are among the last glass pieces that was manufactured in 1979, before Orrefors closed down Strömbergshyttan. They are made by masterblower Hilbert Carlsson. The last three photos shows Hilbert in action at Strombergshyttan in the last months of production 1979 (I took som pictures in the last year). The glassblowers are signed "Strombergshyttan 1979, Hilbert Carlsson". Another masterblower, Kjell Andersson, I know had his special design for glassblower sculptures, but unfortunately I don't have any of them.

The short period I worked at Strombergshyttan in mid 1970s, I worked both in Arne Abrahamssons and Hilbert Carlssons team, but most in Hilbert Carlssons. Now I wonder if this glassblower model is of his own design or by someone else? I have not seen them in any of my catalogs from Strombergshyttan, but I have none from the period 1943-1953, 1955-1961, 1963-1971, 1973-1976 or 1978-1979. If they belong to the normal range of production, the chances I missed them are realtively large.

The material that is preserved after Gunnar Nylund at Strombergshyttan, include a larger drawing/painting of glassblowers. Their head's shape and the shape of the arms, reminds quite a lot about the glass sculptures. I would not find it impossible that they can be designed by Gunnar Nylund? But the only certainty we can say about them is that they are made by Hilbert Carlsson. I talked to him in autumn 2012, and he seemed healthy, but was concerned about that the Swedish glass industry was disappearing. Just two months later, I received the sad news that Hilbert Carlsson died. He had been able to tell so much about Strömbergshyttan, and what today is so unknown in terms of production.

Hilbert made the glassblowers I show here from two different crystal melts. One in the traditional bluish Stromberg crystal, and the other in another more neutral crystal. They are crafted in every detail, shaped by the masterblowers simple tools and hands, without molds or machines. The small blower pipes they keep is blown entirely by hand and then applied to the figures. The sculptures differ a lot from models of glassblowers, made eg in Orrefors by molding. The Orrefors sculptures are not a pure craftmanship as these. Hilbert Carlsson's glassblower sculptures from Strombergshyttan the last year 1979, however, are two worthy examples of the manual glass production at the Stromberg factory between 1933 and 1979.