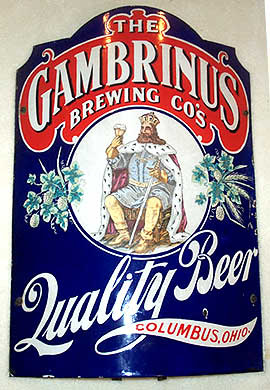 When I was about 8 years old, my Dad and I were exploring some old buildings in Columbus, Ohio that were to be demolished. We were poking around in a dusty corner and came across what looked like a knights shield. It was covered in tar and was fairly heavy.

Being 8, I thought it'd be spectacular to use it as a shield since it was the right shape and had a frame on the back. We carried it back home and my father removed the tar from the surface with some gasoline. We were both astonished at the gorgeous, cobalt blue edge that appeared.

When the tar was fully removed, I was instantly in love with it and it was mounted on the wall in our house for years.

After I got out of the Navy and started a family of my own, my father reminded me that he still had the sign and gave it to me the next time we visited one another.

Out of curiosity, I took a picture of it and send it to the Ohio breweriana web site. I never saw another like it on the Internet for a very long time, but saw one other example on youtube that was being sold at auction.

I'm not sure of the exact date the sign was made, but the Wagner Brewery started in 1906 and the sign has "1908" stamped on the mounting frame in the back.

I don't know if the minor chipping happened after we discovered it or while it was laying around for so many years in that building, but it's in spectacular shape given its age.

I mounted my sign a few years ago by my wet bar in the basement where it hangs today.