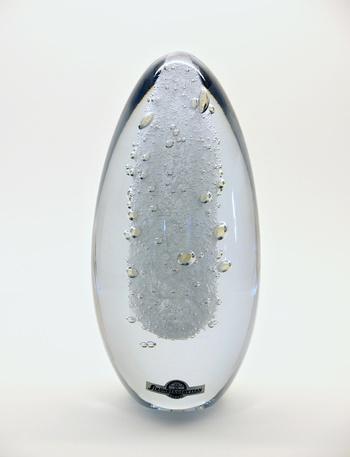 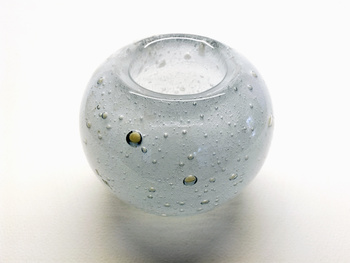 An elipse-formed glass sculpture and a vase/bowl, both with special technique in white underlay and slightly yellow-tinted bubbles in the clear overlay. I don't know how it was made, but shall ask one of the employes who worked when this glass pieces was produced. However I know for sure that the technique was used in some models designed by Asta Stromberg, regarding to a magazine article I have from about 1970, where two other models in the same technique are photographed (one is B1105). In this article Asta Strömberg tell us it's the moon mission in 1969 that inspired her to the bubbling forms in the glass. Therefore I attribute both the elipse formed sculpture and the bowl to Asta Strömberg. I do not think Gunnar Nylund has a thing with these glasses or special technique to do. Unfortunately, he is sometimes credited for them, which most likely is completely wrong.

Another thing to mention is the second class label with blue text on the vase/bowl. First sorting glass from Strömbergshyttan have labels with black text, as on the elipse sculpture. Maybe something to learn if you are interestead in glass from Strömbergshyttan? Why the vase/bowl here have the second class label I am confused about? It seems absolutely perfect in my eyes. Perhaps someone replaced a label from another glass to this? The label is namely affixed up and down.