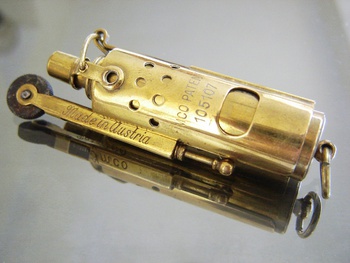 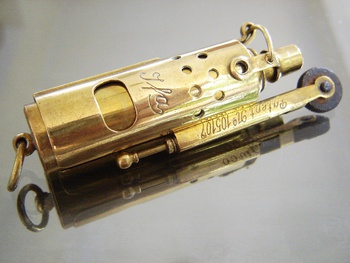 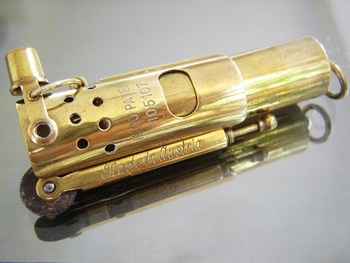 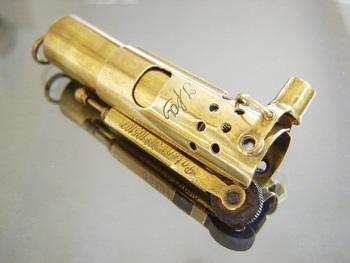 This is IMCO 105107 IFA (IMCO Feurzeuge Austria = IMCO Lighters Austria) pocket cigarette lighter from 1927. It's all brass except steel flint wheel and steel flint spring. It is officially 3rd lighter in IMCO's production line, but first with the "automated" snuffer cap. The lighter is operated by pulling the windshield up which simultaneously opens the snuffer cap. All it takes after that is striking the flint wheel and getting the flame. The flame is extinguished by reverse action - pulling the windshield down which closes the snuffer cap. Very simple but amazing engineering especially if we consider the era of this lighter's production. It made IMCO lighters very recognizable. Later some manufacturers copied the design like Bowers, "no name" copycats probably from Asia and some marked "Made in Japan". Great collectable and fantastic lighter to operate with one hand. It can be found with many different writings like "Rofl", "Neverfail", even advertisements for whiskey and other products and companies.
Do not get confused with "J" instead of "I" in IMCO and IFA markings. In the early days it was spelled with "J" because of the first letter in the name of the factory founder, Julius Meister from Vienna. The company got its name as an abbreviation of "Julius Meister & Co." = JMCO = IMCO. It is the only company so far that produced and sold over 500.000.000 (five hundred million!) cigarette lighters. Unfortunately the company closed lighter production last year. Beside some of the best cigarette lighters mankind has seen it left huge influence on other companies and designs all over the world.