A Beatle Slept With This: Pieces of the Mania

Jim Cushman, known as BeatleJim55 on Show & Tell, has been collecting Beatles memorabilia for 26 years. His collection has been featured at major collectors shows, on TV and radio, and in newspapers, and he’s contributed to books on John Lennon and Beatles memorabilia. 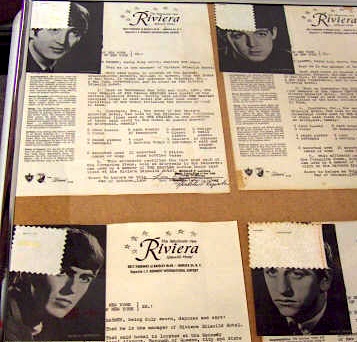 When The Beatles first set foot in the United States on Friday, February 7, 1964, they had no idea of the changes that they would bring to hairstyles, dress, attitudes, and most of all, the world of music. In the adult world, it was thought that the band would be a flash-in-the-pan—forgotten by the end of the year. Now, it’s been 41 years since the band split up in April 1970, and its influence is still being felt.

By spring 1964, companies all over the U.S. and the world were putting out a prodigious amount of Beatles items—toys, dolls, gum cards, jewelry—anything that had the Fab Four’s name on it was guaranteed to sell! Companies fell over themselves for a Beatle endorsement for any product. They wanted to cash in while the band was still hot.

While this was going on, others tried to make a buck going a different route. Instead of mass-produced items, they would put out something that had a more personal touch, a way for the fans to get closer to their idols. After The Beatles took a dip in a swimming pool in Miami, the water was bottled and sold as “Beatle Water”—the money going to a local charity, of course! In Seattle, the rug from their suite was cut up into one-inch squares, which sold for $1 a piece. Same with the bedsheets from other stops on their 1964 U.S. summer tour, from cities such as San Francisco, Boston, Kansas City, Detroit, and New York City.

In Detroit and Kansas City, two enterprising DJs from Chicago paid the owners of the hotels $750 for all of the band’s linens, including pillow cases and towels, and cut them up into 7,200 one-inch squares, mounted them on individual certificates, and sold them to eager fans for $1 a piece. The two DJs would soon receive a cease-and-desist order from lawyers representing The Beatles’ affairs in the U.S. in October 1964, telling them to stop selling the sheets. 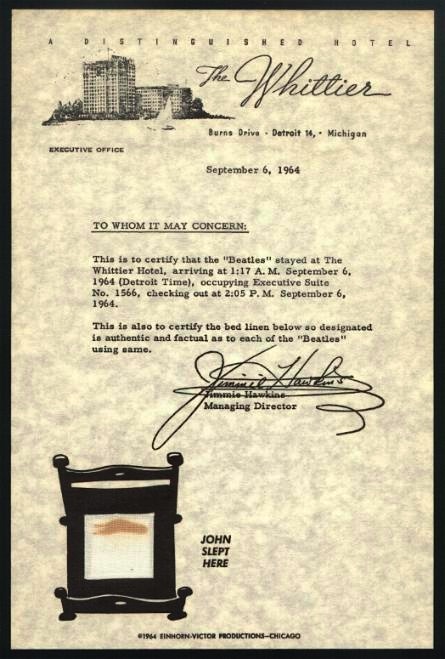 Original Beatle bedding has become a collectors item, and of course, dubious fakes are also sold. Take the Detroit swatches: The originals are on parchment-like paper, while the fakes are found on a white card.

The swatches from the Riviera Hotel in New York were from The Beatles’ last nights in America, September 20 and 21,1964. Other items sold from the Riviera those nights included The Beatles’ silverware, ashtrays, bath mats, and used cakes of soap! Back in 1964, it appeared that anything that the band touched, used, or slept on turned everyday items into precious memorabilia.