Flashback: Glass But Too Late

In this article, the author notes what she perceives as a decline in the standard of glass collecting at the time of publishing and addresses fads, the definition of “antique,” and reproductions. It originally appeared in the March 1941 issue of American Collector magazine, a publication which ran from 1933-1948 and served antique collectors and dealers.

On a cycle as constant as the seven-year locust, though more frequent, magazines devoted to fashions and the home have published articles on taste in interior decoration — good and bad. The illustrations picture a room cluttered with “horribilia” and, for comparison, the same room treated with furniture and accessories that impart charm and a sense of repose. Or another article, by before and after photographs, shows how, with some alterations and fewer dollars, a plain unattractive farmhouse may be converted into an inviting country home. 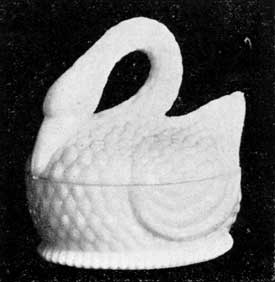 Covered Swan Dish: Of milk-white glass, inside the base is lettered "Vallerysthal." Many other animal dishes bear the same town name. Some, where is has not been ground or filed away, have "Made in France" or "France" on the bottom of the base.

This idea could well be extended to other fields. In fact, it seems to me that magazines on the antique have been rather delinquent in not calling attention to the fact that there is an increasing tendency toward an unfortunate phase of glass collecting. I mean the acquiring of Woolworth — not only early but worse still, late.

During these depression years there has been a gradual decline in standards. No valid reason has appeared, however, as to why this decline should have communicated itself to antiques — particularly collectible glass. There is no dearth of good patterns American pressed glass that may properly be included in the antiques class. From the 1840’s through the 1880’s, many patterns of merit were produced, and no reproductions of these in any form have appeared to deceive the unwary collector. Moreover, they are, for the most part, reasonably priced and within the reach of most buyers.

In general, collectors have concentrated on these patterns and neglected scores of others with just as much to recommend them. Most of these neglected patterns are included in my two books on American pressed glass, and I am now in the midst of research on others omitted.

Illustration I: Imitation Favrile Glass and Pieces with Enameled Floral Decorations: The bowls at the left sought to imitate the fine Tiffany glass that its originator named "Favrile." The bowl and pitcher at the right are of light brown glass decorated with flowers in colored enamels. The pitcher has a handle that terminates in mid-air.

During the past two or three years, “faddist” collectors have been somewhat in the spotlight. By faddists I mean those who strive to accumulate as many different spoon holders, pitchers, goblets or colored cruets as possible. Instead of restricting themselves to sets of tableware in various patterns that could be put to practical use, they have filled their shelves, windows, and available cupboards with their accumulations of one object made in as many variations of design as could be obtained. They, of course, had a right to do this if it pleased them, but the changes and new trends in collecting that have resulted are worthy of note. In becoming hobbyists of this sort many collectors have been misled by their enthusiasms. They have believed that they were acquiring items of actual or potential value. This is not so. Years will neither lend grace nor increase the dollar value of glass of the sort illustrated in this article.

Commercially speaking, an antique is not really a genuine antique until it is a hundred years old. At least the United States Customs Service will not admit as duty-free antique objects made after a set date, 1830, if I remember correctly. However, collectors in general have waived the hundred-year rule in regard to pressed glass, although such patterns as Ashburton, Excelsior, Bigler, and a few others are known to have been made in the 1840’s and thus are very close to the century mark. Excellent designs collectible in sets of tableware were produced through the ’60’s and ’70’s. The real decline began in the ’80’s.

It will be remembered that the Boston & Sandwich Glass Co. and the New England Glass Co. were both forced to close down in 1888 because of Midwestern competition in cheaper wares. In 1892 the United States Glass Co. of Pittsburgh absorbed eighteen of the earlier factories, most of which were in financial difficulties. After 1890 there is little of merit to be found in American pressed glass sets of tableware. The stylistic differences were marked. The glass was heavy, ugly, and distinctly cheap in appearance as well as in price. This being the case, why not draw the line at the 1890’s.

Illustration II: Excellent Examples of Glass Made at the Turn of the Century: These pieces show how glass made in our factories had deteriorated. Both the pieces themselves and decorative patterns are coarse and heavy. The glass itself is also of poorer quality.

Many new collectors are misguided because they think that any old piece of glass or furniture if pictured in a book or magazine must have value. This is not necessarily true. Very often such articles have been written by amateurs, particularly those in magazines not entirely devoted to antiques; thus, misinformation continues to be perpetuated. It would be unfortunate for any collector to start buying the sort of pieces illustrated in this article. And yet many do! The groups shown here picture the sort of trash which cannot even be listed under the heading of “Early Woolworth.”

A sheer waste of time and money is inevitable for those who start buying imitations of cut glass under the delusion that such pieces are antiques. In time they will learn that they have nothing of particular value either to this or to future generations. There are two groups of this cheap ware pictured here (Illustrations II and III). Such types were produced during the era of popular demand for the more expensive cut glass that is, between 1900 and 1915, and the place was mostly the Pittsburgh area. Some factories took out patents on either their designs or methods of pressing and thus some of the better imitations may be found with the lettering “Presscut,” “Newcut,” and so forth. I have answered many letters in explanation of these marks.

The large group pictured (Illustration III) is in a somewhat finer pattern of imitation cut glass and appears more attractive in the illustration than it actually is. All of the pieces are decorated in gold, which has worn off in spots. Just as we are flooded with reproductions of good old pattern, glass today, so was the market over stocked with cheap imitations of popular objects of the time.

Illustration III: Made to Imitate the Popular Cut Glass: Pieces like those in this illustration were heavily embellished with gilding when new, but this generally has disappeared through use and washing.

For instance, the very beautiful Tiffany Favrile glass was followed by copies in inexpensive wares in golden or peacock iridescent coloring. Two golden bowls are shown at the left in Illustration I. The Tiffany Favrile was an expensive art glass, whereas the copies in pressed designs were not really worthy of the name, except in an attempt to reproduce the coloring. The pattern most often seen in gold is a grape design.

Mr. West (now retired), who founded the Westmoreland Glass Co., in Grapeville, Pennsylvania, produced a pattern about forty-seven years ago which he termed Victor. Today, it is known to collectors and dealers as Shell-and-Jewel.

In this pattern the company made a so-called “Table Set” which was composed of a covered sugar bowl, covered spoon holder, covered cream pitcher and butter dish. These pieces, produced in an irridescent coloring, were filled with prepared mustard and sold at a very low price. Since this pattern is older than the others shown here, I refrain from including it among the illustrations. But collectors would do well to remember that covered cream pitchers are always late.

All of the pieces shown in this article, with about three exceptions, were purchased by me in a second-hand junk store for the sum of ten dollars. Whatever I paid was too much, but it was necessary to assemble this exhibition. To save embarrassment to the owner who so kindly endeavored to help me, I am not giving credit, as I customarily do, for the items borrowed. Advanced collectors will readily recognize the types of glass described here as the kind which were relegated to the summer camp, the Salvation Army, or even to the ash can (Illustration IV).

Illustration IV: Such Pieces Speak for Themselves: The most inexperienced collector will, of course, recognize them and knows that such examples could never be considered collectibles.

However, do not be discouraged if you have erred in judgment. Many collectors have done likewise and later weeded out such pieces. There is always a starting point, but it is not necessary to continue a course in the wrong direction. All collectors must consider their individual purses. But any collector can, if need be, buy fewer and better things. In other words — discriminate. Do not become an accumulator!