This article on Ohio and Midwestern glasshouses in the early 19th century focuses on techniques, designs, patterns, and types of wares made, as well as including a list of glasshouse towns and glassmakers. It originally appeared in the November 1940 issue of American Collector magazine, a publication which ran from 1933-1948 and served antique collectors and dealers.

Among collectors, the blown glass which was made at the early glasshouses of Ohio and the Midwestern district has long been highly regarded. The craftsmen working there seem not only to have followed the Stiegel technique but to have developed and even created forms, colors, and elaboration of pattern-molded designs that were distinctly American. This is well illustrated in the beautiful swirl design, so frequently with a delicate feathery effect, produced from part-sized, vertically ribbed molds (Illustrations I and V). 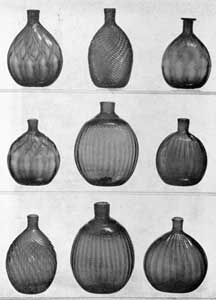 The glass collection formed by the late W. T. D. Howe, president of the American Book Company, Cincinnati, Ohio, and kept chiefly at his country home, “Freelands,” in Kentucky, across the Ohio River from Cincinnati, was known to be rich in pieces of this kind. There, in a separate building that also housed a portion of his remarkable library of English and American first editions, were a series of display cases filled with superb glass.

Nothing delighted Dr. Howe more than to show his collection to those interested. On such occasions he would open the cases and take out various pieces for his collector-guests to handle and inspect. In many instances he would relate fascinating accounts of how he acquired this or that piece directly from the descendants of some of the early glassworking craftsmen of Ohio and the Midwestern districts.

Such examples were, of course, only a part of what was one of the outstanding collections of free-blown and blown-and-molded glass, principally the products of American glasshouses. It included rare and fine examples, characteristic of the craftsmanship of the blowers in Stiegel’s Manheim glasshouse, the early factories of the South Jersey area, and the New York and New England glasshouses where the South Jersey technique in form and decoration was perpetuated.

This Howe collection of well over a thousand pieces is to be dispersed at a two-day sale, November 8 and 9, at the Parke-Bernet Galleries, but before this happens there is still opportunity to record the accomplishments of the early glassblowers of Ohio and the Midwestern districts as exemplified by specimens of this glass that Dr. Howe acquired through years of collecting.

Illustration II: A Magnificent Blown-Three-Mold Bowl: Of brilliant clear green glass, light tone, this piece was probably blown at Kent, Ohio, in a decanter mold. The pattern consists of vertical ribbing between wide bands of diamond diapering. The band of gadrooning which encircles the shoulder in decanters has been almost entirely lost or obliterated in expansion of the bowl. Several of these bowls are known in light green glass and three or four in a glass of olive-yellow tone. This bowl is, so far as known, unique in size and widespread sides.

From the early years of the 19th century, and probably through the 1840’s, some of the finest glass, both free-blown and pattern-molded, ever produced in America was made in the glasshouses which dotted the Ohio and Pittsburgh-Monongahela districts. This glass in brilliancy of metal, coloring and delicacy of the patterned design ranks with anything produced at Manheim or by the Venetian or other Continental blowers from whom the Steigel workmen drew their inspiration.

The only exceptions to this are the amethyst perfume bottles, particularly the so-called “Diamond-Daisy” pattern, which are generally considered to represent the apex of Stiegel’s achievement in glassmaking. Incidentally, these beautiful bottles, in the large and small ogival or Venetian diamond pattern, as well as the “Diamond-Daisy,” are well represented in Dr. Howe’s collection.

It also contains many choice specimens of typical American blown-three-mold, clear, as well as in colors, and several rare examples of that type of molded glass in the pattern peculiar to one of the early Kent, Ohio, glasshouses (Illustration II) and which may possibly also have been produced in the Wheeling, Virginia, district. 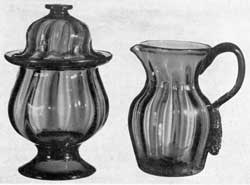 Illustration III: Probably from the Pittsburgh District: The sugar bowl, with cover, has an applied foot and was molded with wide-spaced expanded ribbing. It has a galleried rim, dome cover, flat button finial, and was made of deep sapphire blue glass. The pitcher was molded in the same pattern of blue-colored glass with violet tone. Pieces of this type are believed to have emanated from the Pittsburgh district and, quite possibly, to be a product of the Bakewell, Page & Bakewell Glass Works — period circa 1830-40.

Bottles and flasks, patterned in molds and expanded, were a leading commercial product of most of the early Ohio and Midwestern houses. These were produced in an almost never-ending variety of size, form and color, and combined with delicate designs patterned in ribbed and latticed or diamond molds. The sixteen-rib molds used at Mantua, Ohio; the twenty-rib, identified with Kent; and the Zanesville twenty-four rib were used by skilled blowers to produce not only expanded vertical and swirled ribbing but, by double insertion of the gather, the fascinating broken swirl and delicate “noncom kernel” effects, distinctly associated with these Ohio and Midwestern glasshouses, were produced.

The chestnut-shaped pocket flasks, patterned in diamond molds are among the finest flasks made by these early craftsmen (Illustrations I and VI). They were produced at Mantua and Zanesville; also, it is believed, at the earlier Gallatin-Kramer glasshouse at New Geneva, Pennsylvania, and possibly in other factories in the Pittsburgh and Midwestern area.

The Mantua mold had fifteen diamonds in a lateral chain; the Zanesville, ten; and the New Geneva mold, that has already been illustrated in an article by Harry Hall White, sixteen diamonds. The last was a part-size two-piece mold; the Mantua and Zanesville similar molds may likewise have been two-part, although some are inclined to the opinion that they were three-piece, hinged molds. On the Zanesville flasks (Illustration I), the ogival design usually terminates in a pointed arch effect encircling the lower part of the flasks.

Illustration IV: Shallow Bowl and Small Compote: The bowl or pan with folded rim and expanded vertical ribbing is of golden amber glass. The compote has a bowl blown in a flask mold — ten diamonds — and applied stem and foot. Of brilliant deeper amber glass, it is attributed to Zanesville, Ohio.

Using the same bottle and flask molds, the blowers made beautiful table and decorative wares. A large part of the latter represented individual pieces blown as gifts or for home use, but to some extent such wares were probably made commercially for local markets.

The sugar bowls and covers; pitchers, large and small; pans and shallow bowls (Illustrations III, IV, V, and II) , varying in depth and diameter; salts, flips and tumblers, vases and other articles patterned in these bottle molds are among the finest examples we have in Early American blown glass. The colors are fine and varied. The ambers, ranging from a dark brownish tone to golden yellow, are superb; the greens vary from brilliant aquamarine to deep yellowish or olive tone; occasionally a delicate cornflower, blue or deep sapphire, is encountered; and rarely a brilliant, vibrant amethyst. Similar pieces, free-blown and without pattern, are also encountered in the same range of glowing brilliant colors. 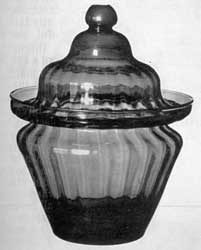 Illustration V: A Zanesville Sugar Bowl: Patterned in a bottle mold, this piece has expanded vertical ribbing, galleried rim, and double dome cover with ball finial. Similar bowls are known in clear, brilliant light green and greenish-yellow amber glass. Others, unpatterned, have been found in dark amber and green glass.

Taken as a whole, this Ohio and Midwestern glass falls in a category of its own, distinctly American and expressive of the finest craftsmanship in the development of glassmaking in America, untainted by the later commercial mechanization of the industry.

The Howe collection is particularly noteworthy for its many outstanding examples of this Ohio and Midwestern glass, Ohio-Stiegel, as the molded pieces have been aptly termed. In the accompanying pictures many of the choice examples are illustrated.

Editor’s Comment: Since there has been such keen interest for a long time among collectors in the early glass made in Ohio and the Midwestern district, but as yet no condensed listing of the places where this glass was made nor brief biographical notes about the men who launched these glass endeavors, the following check list of glasshouse towns and men with dates would seem to be in order. It has been compiled from the various books and articles on American glass by Rhea Mansfield Knittle. Harry Hall White, and Mr. George McKearin.

Mantua: David Ladd and Jonathan Tinker started glasshouse in 1821. The next year they separated and left Mantua. Ladd went to Carthage and Tinker to Franklin Mills where both later started small glasshouses. 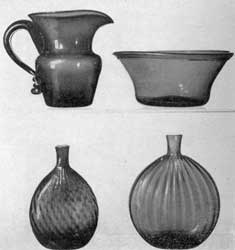 Steubenville: Glass furnace built 1830 by Kilgore and Hanna. Lasted only a few years. Wells, Henry & Co. also erected a small furnace here in 1836 and continued it for about ten years.