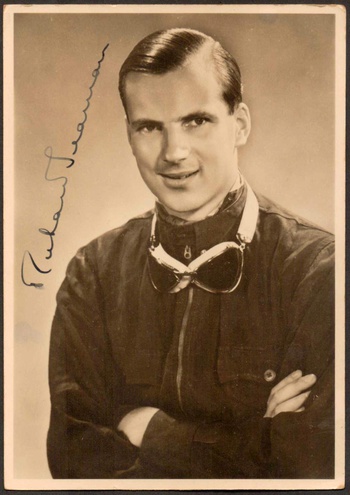 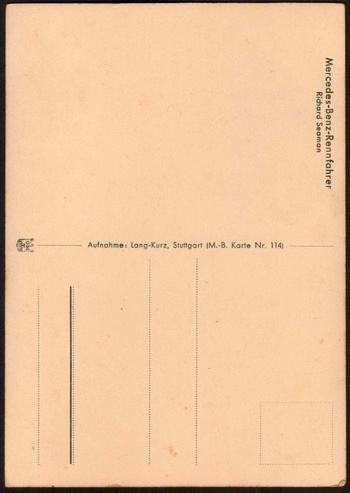 - 1938 German photo postcard for the Mercedes-Benz Racing Team
-- unused, autographed photo card / Richard Seaman - Race Driver
- Aufnahme by Lang-Kurz - Stuttgart (Mercedes-Benz Karte Nr. 114)
*** Richard John Beattie "Dick" Seaman (1913-1939), was one of the greatest pre-war Grand Prix drivers from Britain. He famously drove for the Mercedes-Benz team from 1937-1939 in the Mercedes-Benz W125 car, winning the 1938 German Grand Prix. In 1934 he resolved to become a racing driver and took his MG car to the European mainland to gain experience. He won the Voiturette race of the Swiss Grand Prix event at Bremgarten at his first attempt. He won other small races for English Racing Automobiles (ERA) and eventually Mercedes team chief Alfred Neubauer invited him for a trial at the Nürburgring. Both Silver Arrows teams used to have at least one foreign driver, if available. In 1937 he signed for Mercedes-Benz against the wishes of his mother, who did not want him to drive for a "Nazi" team. Having a solid start to his career with Mercedes in 1937, he excelled in the 1938 season - he won the 1938 German Grand Prix, (giving the Nazi salute on the podium and becoming one of the favourite drivers of Hitler), and came second in the 1938 Swiss Grand Prix. In December 1938 he married Erica Popp, the daughter of the director of BMW, again against his mother's wishes.
Leading the 1939 Belgian Grand Prix at Circuit de Spa-Francorchamps during a wet race, he crashed his car into a tree during lap 22. It caught fire instantly with an unconscious Seaman inside. It is thought he was using a line through a corner that was only normally used in the dry. On his death bed he remarked to the Mercedes chief engineer, "I was going too fast for the conditions - it was entirely my own fault. I am sorry". He died some hours after as a result of his burns, at just 26 years of age; it was Mercedes' only fatality during that time. After Seaman's death, Mercedes-Benz dealerships worldwide were ordered to display his photograph in their windows. Richard Seaman was buried at Putney Vale Cemetery in London.