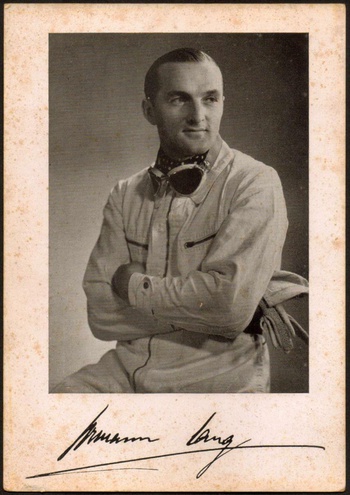 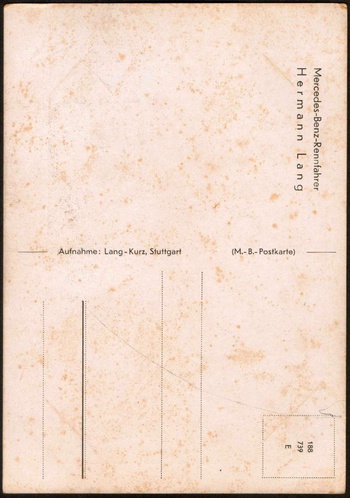 - 1938 German photo postcard for the Mercedes-Benz Racing Team
-- unused, autographed photo card / Hermann Lang - Race Driver
- Aufnahme (photo) by Lang-Kurz - Stuttgart (Mercedes-Benz Karte)
*** Hermann Lang (1909-1987) was a German champion race car driver. Born in the Cannstatt district of Stuttgart, Baden-Württemberg, Germany, at age fourteen Hermann Lang had to go to work to help support his family following the death of his father. Young Lang found a job as a motorcycle mechanic, eventually buying his own used bike with which he began amateur racing. He won the very first race he entered and before long decided to compete in the sidecar class. At age twenty-two, he won the German sidecar mountain race championship. Lang's big break came when he landed a job at the Mercedes factory where he became part of their Grand Prix motor racing team. He was made head mechanic for the Mercedes-Benz W25A model to be driven by the Italian star Luigi Fagioli who had left Alfa Romeo to create a powerhouse Mercedes factory team that also included Rudolf Caracciola. Following a very successful season in which Fagioli won both the Italian and Spanish Grand Prix, Hermann Lang was given a chance to drive for the Mercedes team. He proved to be most capable on high-speed racetracks, capturing his first win in the 1937 Tripoli Grand Prix at the Mellaha Lake course in Libya which was then the fastest racetrack in the world. Lang dominated the event, winning it for three straight years. That year he won his second major race at the AVUS extravaganza. In 1938, he won two more races for Mercedes including the prestigious Coppa Ciano at Livorno, Italy. Nevertheless, in spite of Hermann Lang's skills and racing success and his popularity with racing fans, being a part of the Mercedes Silver Arrows team was not easy. Made up of wealthy and aristocratic drivers who looked down on the uneducated, working-class Lang, he was always treated as an outsider. However, in 1939 he earned their grudging respect when he won five of the eight Grand Prix races he started, including victories at the Belgian Grand Prix, the Pau Grand Prix in France, the Swiss Grand Prix and his third consecutive Tripoli Grand Prix. He clocked the fastest lap at the French Grand Prix and was leading the field but engine trouble knocked him out of the race. In 1939, Lang also competed in, and won, the Kahlenberg hillclimbing race in Austria. The onset of World War II robbed Lang of his best years but after the war ended, he returned to racing in 1946 without a team, driving a six-year-old BMW to victory in the first post-war race in Germany held at Ruhestein. In 1949 he began sports car racing and then competed in Formula Two racing before joining the Mercedes Grand Prix racing team in Argentina, at the Buenos Aires Grand Prix in 1951. In 1952, at age 43, he teamed up with Fritz Riess to capture the 24 hours of Le Mans. The following year, he published his autobiography titled "Grand Prix Driver," with the Foreword written by the Mercedes team manager, Alfred Neubauer. Published in Germany, it was translated into English by Charles Meisl and brought out in England. In 1953, Hermann Lang was given a chance to participate in Formula One racing driving for Maserati after one of their team drivers was injured. He raced in two F1 events that year with his best result a fifth place finish at the Swiss Grand Prix. The following year Mercedes rejoined Grand Prix racing and Lang came back for another F1 season behind the wheel of a Mercedes W196. But at age 45, he had a less than successful campaign that saw him replaced in several races by one of the team's younger drivers. His season and career ended at the 1954 German Grand Prix at Nürburgring when he spun out after ten laps. Lang recognized the time had come to retire from racing and he returned to his job at the Mercedes factory.