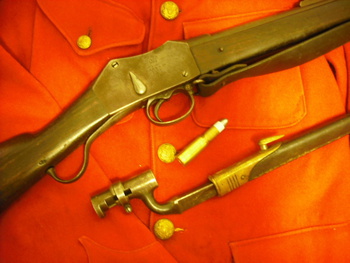 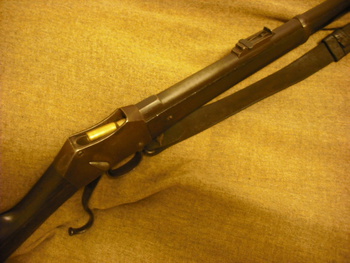 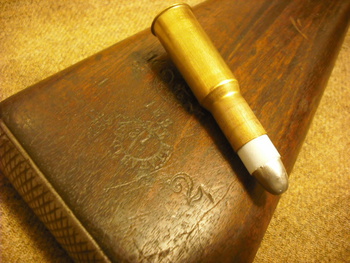 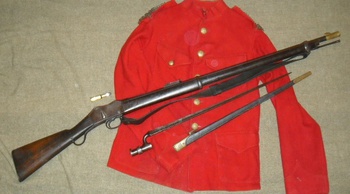 Another military shoulder arm of the British Empire that deserves the word “iconic” is the Martini-Henry. I’ve wanted one of these ever since watching “Zulu” and “Zulu Dawn” and I couldn’t resist using my period British red tunic as a backdrop (I’ll do a post on the tunic separately one day). The Martini-Henry is a lever action, breech loading, single shot rifle developed by a Swiss named Friedrich von Martini and a Scotsman named Alexander Henry. It was first issued in 1871 and served the British Empire for over 30 years. It fires the potent “Short Chamber Boxer-Henry .45” Cartridge, and some say the kick from the Martini inspired the name for the drink.

The receiver bears the crown and cypher of Queen Victoria, and the Roman numeral II underneath the lock inspector’s mark, indicating my Martini is a Mark II; an updated version starting in 1877 which addressed some minor flaws in the original pattern.

We can trace some of this particular arm’s history starting with the receiver, which shows it was manufactured by the Birmingham Small Arms & Metal Co. in 1888. A stamp on the stock indicates the weapon was refurbished at the Allahabad Arsenal, India in 1892 and designated as a second line weapon – presumably because first line troops were by then equipped with the newer Lee-Metford. From there it received another stamp near the rear sight “N.S. NEP.” for Native Service, Nepal. At some point after that it ended up in the arsenal at Lagan Silekhana Palace in Kathmandu Nepal, where it remained until the arms in the arsenal were bought and brought to the US for sale.

The correct 1880 pattern sling (no way to tell how old it really is), the bayonet and scabbard all came from that same palace arsenal. I also have a brass muzzle cover I’ll post with the bayonet.

Original Martini Recipe: The original .577/450 Martini Henry cartridge was made of brass foil fit into a metal base and crimped at the shoulder from .577 to .450 inches. In it was 85 grains of coarse black powder under a glazed board disk with a concave beeswax wad on top, over which were two more glazed board disks. The whole thing was topped by a 480 grain, .450 caliber round nosed bullet, wrapped in a paper patch and lubricated with beeswax.

My Martini Recipe: My brass cases started life as 24 gauge shotgun shells that were reformed to the correct proportions. Initially I used 85 grains of Goex ffg in an attempt to simulate the original load, but instead of all those disks and wads, I put in corn meal as a filler, topped by a lubricated wool felt wad. I used a 475 grain, .45 caliber lead bullet that is round nosed and made for paper patching with a cupped base and no cannelures. I “patched” the bullet with onionskin paper. (When I learned to patch bullets I found it’s a lot like rolling your own …um….cigarettes. You waste a few papers getting the knack.) The paper patch reduces fouling and supposedly improves accuracy. I paper patch to more closely replicate the original cartridge.

After experimenting around, I found that 95 grains Goex fffg worked better, giving me 7 - 8 inch groups at 100 yards. (The bore looks pristine!) Not bad for a 126 year old rifle, eh?